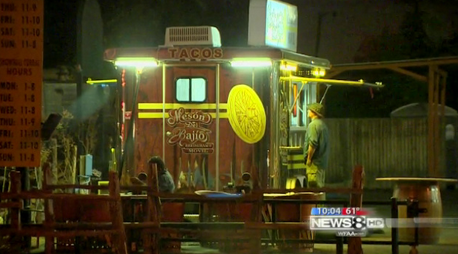 DALLAS – While more and more city-approved food trucks pop up in Dallas and Fort Worth, a News 8 investigation found stark differences in the rules each city requires to make sure they are clean.

Let’s start in Dallas, where food trucks that serve inside city limits are required to park overnight at a place called a commissary. They restock food here and a commissary employee gives each truck a hardcore scrubbing. It also helps the city keep track of them because it must remain there that night.

Oh Kwon, co-owner of the popular Dallas-based truck Ssahm Korean BBQ, said he thinks his truck wouldn’t be as clean without the commissary.

Fort Worth requires its food trucks to visit a commissary each day but does not make them stay overnight. News 8 followed five food trucks after closing time and found none went to a commissary.

Two parked at private homes, one went inside a warehouse, another parked at a shopping center and one went to a trailer park. None of those locations are official commissaries inspected by Fort Worth’s Code Compliance Department, as required by city statute.

“Definitely, if a health inspector is going to have as their obligation to inspect something they need to have a way to find it,” said Glen Garey with the Texas Restaurant Association.

The City of Fort Worth declined repeated requests for an on-camera comment. However, in a statement, a spokesman writes:

“Owners of food trucks, similar to that of restaurants, are doing sanitization throughout the day. They clean their counters, serving areas etc., just like restaurants do.”

It’s not just about health, though. It’s also about the environment.

Back on the Dallas side, the most popular commissary serving Dallas-based trucks is United Caterers. It provides trucks with access to a sloping floor that drains grease and solid waste into a series of underground filters.

United’s discharge is frequently checked by a health inspector.

“We need to be conscious of the environmental aspects of these operations and make sure that we’re disposing of the waste responsibly,” said Marcie Newman, a spokeswoman for United Caterers.

On the other hand, in Fort Worth, most city-approved commissaries are far less sophisticated affairs, usually tucked behind mom and pop restaurants. But at least that might be an improvement in the case of Meson del Bajio, a Fort Worth food truck.

At closing time, on the four nights News 8 watched, the truck did not go to a commissary. It didn’t go anywhere. It stayed right where it was on the grounds of Cowtown Chow Down Park.

At closing time, owner Gabriel Lopez dumped a large garbage can of sink water into the street.

“In that case, you’d think that the city could find that since they’re staying there each evening and enforce against it,” said Garey.

One night, owner Gabriel Lopez carried in a load of pillows, blankets and a rollaway suitcase. Then he went inside the food truck and turned out the lights.

The next night it was a similar story. Expect this time, his wife went into the truck and covered up the window. Soon, soapy water began pouring out the back door. When she re-opened the door, she was wearing different clothes and a towel around her head.

After that, the two went inside and it’s, again, lights out.

Lopez: “We just finish a couple of minutes ago. So, we try to clean it up everything.”

News 8: “But are you going spend the night in here?”

We also asked Lopez which commissary he uses to clean his truck?

Lopez: “What is the name of it? It’s a Mexican restaurant. I forgot the name. I don’t have the papers.”

News 8: “When was the last time you were there?

Lopez: “Once a month, sometimes because we don’t have to care a lot about it.

Again, Fort Worth ordinance requires trucks to visit a commissary once a day.

But it’s the slight difference in each city’s requirement that separates the two. In Dallas, the caveat where trucks must park overnight at a commissary lends itself more readily to enforcement, experts say.

“There’s a whole litany of things they need to take care of. Going back to the commissary and restocking is the easiest and most easily checked solution to that problem,” said Garey said.

We are vigilant in our efforts to protect the public’s health. We routinely inspect food trucks and their commissaries for compliance with state and local regulations. Also, if a problem is reported, we respond with a complaint investigation. If a complaint is confirmed, we take the necessary action to address the problem in compliance with state and local regulations. Residents can report concerns by calling 817-392-7255.