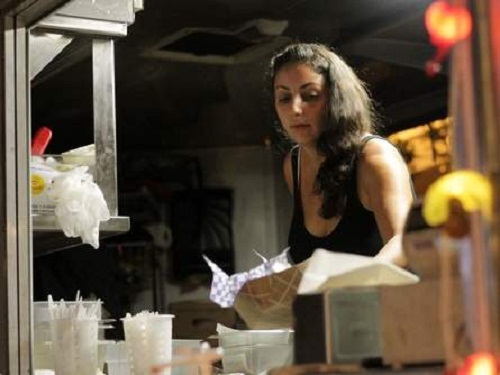 Gainesville’s first food truck rally on Jan. 26 was a huge success, judging by the hundreds of hungry customers who stood in long lines to get their meals.

But were the downtown brick-and-mortar restaurants as thrilled to see the new competition roll up?

Turns out, some restaurateurs said the event actually boosted business.

Stefani Weed, a manager at The Jones B-Side restaurant, said the gathering across Southwest Second Avenue in the parking lot at High Dive was good exposure for the entire downtown business district.

Plans are being finalized to bring another, bigger food truck rally to Gainesville on March 16. If the rallies become a regular event, Weed said she doesn’t perceive any serious competition for restaurants because patrons have different expectations for each venue.

She said the dining atmosphere and types of food are different, so for patrons, it simply depends “on what kind of mood you’re in.”

“When you’re coming here, you’re getting a certain experience. But you know when you go to a food truck, you do it because … it’s quick. It’s cheaper, you know, but it’s still quality food.”

Zack Henrikson, a manager at the downtown Relish location, agreed. He said he doesn’t think food truck rallies will siphon customers away because each eating establishment has its own drawing card.

Henrikson said because the food truck rally only lasted until about 9 p.m., Relish can still cater to customers looking for food late into the night.

“Nobody sells burgers as late as we do,” he said, noting Relish’s closing time of 3 a.m.

Henrikson saw the effects of the rally first-hand when an unexplained wave of customers pulsed through the shop that night. He said he didn’t know what was going on at the time, but when he found out about the event later, he said he realized the surge in customers coincided with the closing of the food truck rally.

Brett Ader owns Humble Pie food truck, one of the six vendors at the rally along with Pelican Brothers, Off the Griddle, Go Go Stuff Yourself, Grilled Cheese Wagon and La Lola Loca. He said the prospect of selling food alongside even more vendors is encouraging.

“It stimulates the entire area,” said Ader. “Food truck food is not like a sit-down meal. It’s relatively on the cheaper end. You can get two different things from two different trucks to make your own mishmash.”

He said more trucks can draw more people and add diversity to the menu items offered at the event.

“I feel like the more of us there are, the more the merrier,” he said. “We all kind of have our niche.”

Ader said he didn’t perceive any hostility from next-door Five Star Pizza, although he was technically a competitor with his truck’s specialty pizza menu.

“Actually, a friend who delivers for Five Star came over to hang out,” he said. “It seemed positive.”

Weed said she feels no ill will toward the food trucks, either.

“I went over there and got a grilled cheese,” she said, laughing.