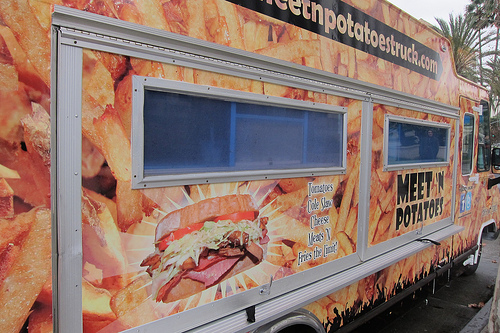 The food fight between restaurateurs and mobile gourmet trucks has picked up in recent weeks as the two industries tussle over a prime customer base — the lunch crowd.

Steve Sevag, operator of the gourmet food truck Meet ‘n Potatoes, is one of the mobile food vendors who’s been caught up in the match.

Owners of the restaurants that he parks near say his and other trucks siphon away customers and park illegally to do so. Sevag said he’s just responding to consumer demand for his jumbo sandwiches.

“This is the industry right now,” Sevag said.

Several business owners expressed concerns last week to police and city officials about Meet ‘n Potatoes, which they alleged was parked illegally on the street.

On Tuesday, Sevag’s wife parked a loaner food truck — the original undergoing maintenance — in front of the office tower at 505 N. Brand Blvd.

Soon after, the building’s management made a citizen’s arrest and called police, Sgt. Tom Lorenz said.

Police cited Meet ‘n Potatoes operators for violating codes that make it illegal to park a food truck in one spot for more than 15 minutes, and for not having a Glendale-issued permit, he said.

Glendale’s ordinance for gourmet food trucks is similar to Burbank’s and other Los Angeles County cities, although many are in the process of retooling their laws to be more in line with state regulations, which don’t include the 15-minute rule.

Lorenz said officers often try to warn food truck owners instead of citing them, but in the case of Meet ‘n Potatoes, the citizen’s arrest prompted police to respond with a citation.

Sevag said he and his wife were just trying to run a business and weren’t doing “anything that breaks the law.”

Riley Wilhite, assistant property manager of the 505 N. Brand Blvd. property, said the food truck had been parking out front for the past two to three months for at least two hours at a time, leeching business from a small cafe inside the building.

“Businesses are affected by them,” Wilhite said.

Police were also investigating claims that the $450 operating permit was stolen, Lorenz said.

Grievances from eateries near ABC 7 studios and DreamWorks on Flower Street have also been lodged against some gourmet food trucks, which park along the sidewalk and draw away customers, officials said.

The Circle 7 Cafe, which caters food for ABC 7, has complained to police about the gourmet food trucks taking business away, Glendale Police Lt. Bruce Fox said.

In most cases, the food trucks set up shop in a no-parking zone in front of the studio, he said.

Police have been working with food truck operators, advising them about parking restrictions and educating them on obtaining city permits, Fox said.

Despite the push-back, Sevag said he will continue to drive to cities where his meaty dishes are in high demand.

“That’s the world we live in right now,” he said. “They might have to get used to it.”