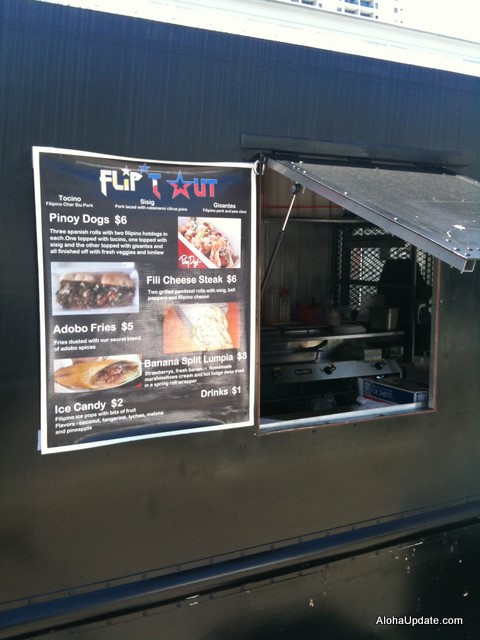 Some may say the lunch wagon craze has gotten out of hand. They’re popping up everywhere around Oahu and that’s saying something, most of the island already lived off plate lunches from these trucks.

But the new found fetish has lead to some pretty delicious wagons opening up. One in particular, Flip’T Out I happened across after surfing Kewalos. It was parked on Ward outside of Sports Authority and was quit unassuming with an all black paint job and small lettering spelling out the business.

I wandered over and a nice lady, I believe Mel, greeted me and informed me that the Banana Split Lumpia was out, they had already gone through 500 that week. She also mentioned that although it was to be taken off the menu next week, they were quickly rethinking that strategy.

I decided to go with the Pinoy Dogs which were now made with Adobo Pork. These mini treats were put in a sweet Spanish roll each and topped with tocino, sisig, and gisantes along with a veggie mix of kinilaw that included tomatoes.

The little dogs came out in about 7 minutes and were not all that little. The plate was more than enough to fill someone up.

Also, turns out those three mystery toppings were delicious ways to make pork. The combination of whatever they were marinated in, the hot dog, sweet roll and little veggie toppings were the perfect match for my pallet. At $6 a piece, it ended up being a pretty good deal.

That was all I had this time around, but once I find out when theyll be back, I’ll be sure to try out that Banana Split Lumpia, 500 people can’t be wrong, can they?