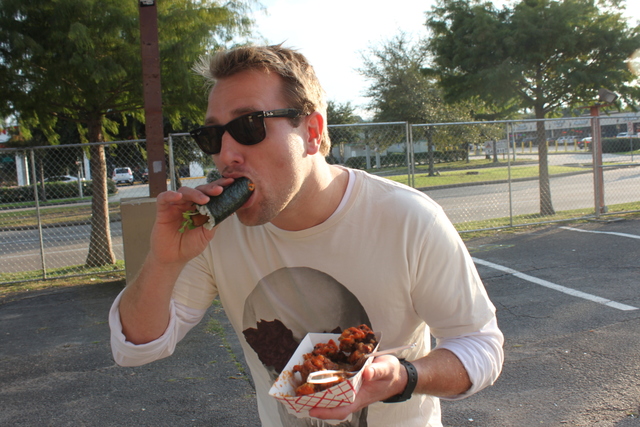 The 2nd Annual Houston Food Truck Festival brought a crowd of 3500 for lunch Saturday at Stereo Live despite the afternoon’s threat of rain. Over 20 trucks were available and most offered exclusive festival deals, such as Happy Endings who shaved a dollar off tacos that are normally priced at $4. With all the deals, it was easy to sample a little something from quite a few trucks, but only if you were willing to wait in line.

What eased the wait for some were the drinks from bars posted around the venue, live bands, belly dancers, a rock wall, free face paint, and free karaoke. On top of it all, Caphin and Little Soya were handing out free samples.

The variety of entertainment was something new, and for second-timer Norris Thompson II, 48, bartender (who made not one but two appearances on the karaoke stage) the entertainment this year was one of the things that made the festival better than last year’s.

“It was a lot better,” said Norris. “More compact so we can get to the stuff quicker. The lines weren’t so bad, and the waffle truck was ready and that’s all that matters.” Last year, Norris was in line for 20 minutes before the truck broke down. But this year, The Waffle Bus was fully functioning and attracted a line so long it disappeared on the other side of the building.

Both The Waffle Bus and Chi’Lantro Korean BBQ featured the longest lines of the day, which each stretched across the parking lot with at least 50 people at any given time. But who wouldn’t wait for that incredible crunchy, tender chicken breast sandwiched between a folded golden, fluffy waffle? A treasure, surely.

For many others, however, it was their first time attending the festival such as Matt Trembly, 30, an IT consultant, who had been searching for Muiishi Makirritos and made a beeline towards it the moment he came. But not only did he finally fulfill his mobile sushi quest, but the festival also served as a learning experience.

“I never knew there was another side other than food,” said Trembly. “I thought all the trucks were all food. I didn’t know that you had other types of artists or jewelry-makers, clothing designers or whatever. So that was really cool.”

Urban Izzy and Heels on Wheels were two trucks serving style instead of food, making the 2nd Annual Houston Food Truck Festival was a one stop shop for food, fashion, and family entertainment.