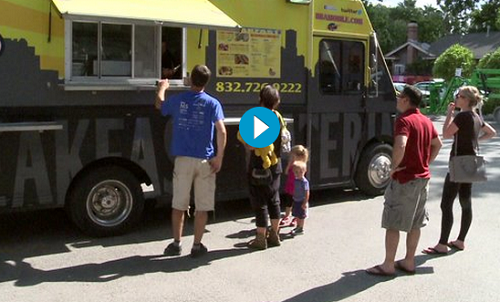 HOUSTON, TX – Alright guys you know what day it is. It’s the last Friday of the month and you know what that means, Food Truck Friday. And you’ve got to know you’re on to something when you produce a segment like ‘Food-Truck-Friday’ and every other TV station in town follows suit. But you know what they say: you’ve got to get up pretty early in the morning to unseat the original. And no one knows mornings better than Jimmy Ruckman and the crew at Breakfast Burritos Anonymous.

If your commute takes you through Montrose, odds are you already know the big yellow burrito truck. The last two years Jimmy and company have been serving breakfast at the same spot in front of the Inversion Coffee Couse.

“Nobody else was selling breakfast food during breakfast hours,” Ruckman says. “There’s a couple other trucks out there that do have some breakfast items, but they do them for lunch and dinner, and we figured there would have been less competition in the wee hours of the morning.”

It’s everything from bowls to burritos and sausage-and-egg sandwiches served with melted cheese. And already the little truck is causing a big stir. Chew on This: renowned statistician and editor-in-chief of ESPN’s FiveThirtyEight blog, Nate Silver, has named the truck 1 of 16 best burrito places in the US in a bracket-style showdown aimed at finding America’s best burrito. And right now the big yellow truck is the only Houston restaurant on the list.

“I didn’t know who they were when they were judging me,” Ruckman says, “but they judged and I guess I’m being advance to the round of sixteen people.”

And with such a strong lead on Houston’s breakfast food truck market, you can be sure others will follow. But like we said in the beginning, you’ve got to get up early to unseat the original.

That’s something we know all too well around here.