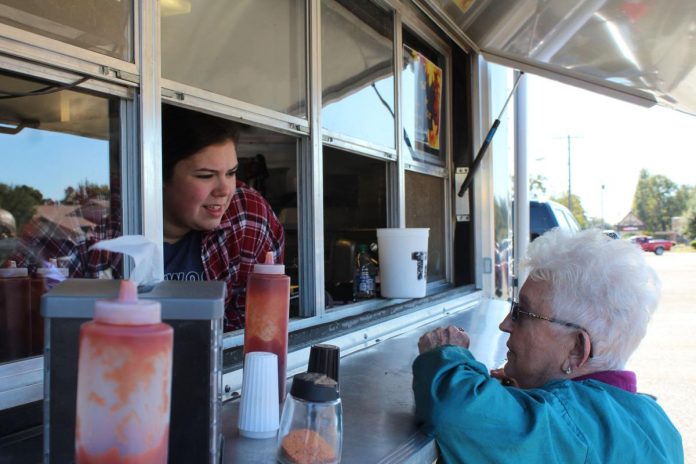 By Tommy Culkin  |  The Paris News

The smell of food wafted down Lamar Avenue on Friday as hundreds turned out to enjoy the offerings of local food trucks for the third annual United Way Food Truck Wars. 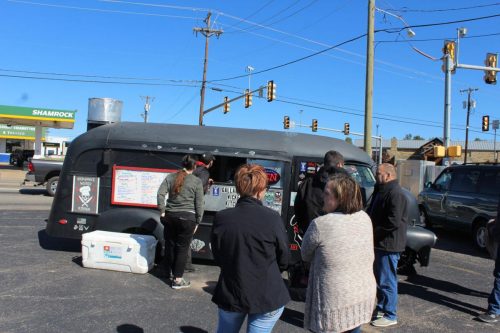 Participating in the event were Burgerland, The Golden Oinker, Gallaghan’s Wicked Kitchen, The Chocolate Kettle, Taco City and Country Belle Pies. Each participating food truck donated a percent of its proceeds to the United Way of Lamar County to help it reach its fundraising campaign goal.

“I think it went really, really well,” United Way executive director Jenny Wilson said. “I think there were slightly fewer people than last year because of how cold it was, but overall it was still a really good turnout and there was a steady stream of customers all day long.”

For A.J. Loewen, who stopped by for lunch, the event was not just a chance to eat good food, but also to support the United Way, which provides funding for 26 area nonprofits.

“Burgerland’s a given, and I know the people who run the pie place, so I need to hit them up too. I’ve also been meaning to try The Golden Oinker, but I don’t know if I’ll have space to eat all that,” Loewen said with a laugh. “I think it’s a great cause. The United Way does a lot of good work, and if I can support them through this, that’s all the more reason to do it.”

“I actually didn’t know this was going on beforehand,” he said. “I was driving down the road and saw all the food trucks here, so I decided to stop and eat.”

Terri Bryan, who operates The Golden Oinker, called the event a huge success, saying it was the biggest turnout she’s seen for it.

“I think we served at least 60 or so people today, and then there were others going to all the other trucks,” she said. “I’m thrilled by how it went. The United Way is an awesome thing to support. Events like this, we get our name out and we’re also helping the community.”

The food truck that makes the biggest donation will be named the Food Truck of the Year, though Wilson said it’ll take roughly a week to count all the donations from the event. Burgerland has won the title in each of the last two years.

“Each food truck can decide how much they want to donate for themselves,” Wilson said. “I understand that some of the smaller ones need to keep a larger percent of what they make, for business reasons.”

The event typically nets $2,500, and Wilson said she expects it to be around that much again this year.

“It’s not a huge fundraiser in terms of how much we make, but it’s great at raising awareness of the campaign and it’s a lot of fun,” she said.

In years past, local restaurant Hole in the Wall has had a truck at the event, though this year they were unable to make it, Wilson said. However, the restaurant still showed its support for the United Way by pledging to donate a percentage of its earnings from the day to the agency.

The fundraising campaign ends at the end of November, and the United Way is 85% of the way to its $500,000 goal, Wilson said. The funds raised through the campaign will go to support the United Way’s partner agencies in the coming year.

Wilson is confident they will reach their goal, as several large sources of payroll deductions, including Kimberly-Clark and Paris Junior College, haven’t submitted their contributions yet.

“I’m so thankful for everyone who participated and made it a great event, both the food trucks and the people who came out and ate,” she said. “It’s just such a fun event.”