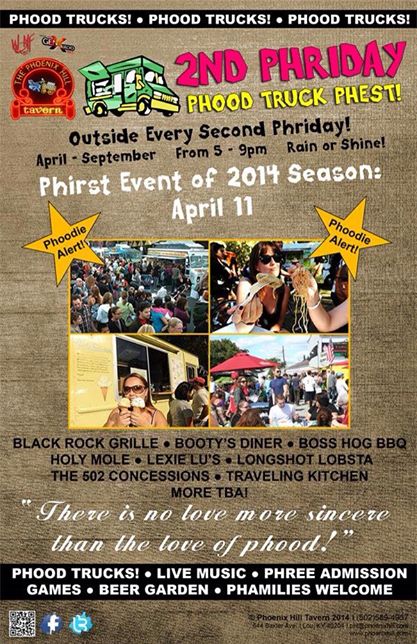 The weather is getting warmer, and we’re all starting to spend more time outside, thankfully. You know what that means if you love food truck cuisine – Food Truck Fridays at the Phoenix Hill Tavern is starting up, and their first event is tomorrow the 11th of April!

There will be plenty of trucks in attendance – Black Rock Grille, Booty’s Diner, Boss Hog BBQ, Holy Mole, Lexie Lu’s, Longshot Lobsta, The 502 Concessions, Traveling Kitchen and more will be there to serve up some of the best mobile cuisine Louisville has to offer. I know that I absolutely adore getting to be out in Phoenix Hill partaking in the awesome cuisine these trucks have to offer – don’t miss the chance – there’ll be live music as well!

Not only is there an amazing selection of food (fresh off the truck), but there’s a great beer garden set up as well – local and not-so-local beers are being served, and the prices are just as amazing as the food! One of the other great things about the Food Truck Fest being right behind Phoenix Hill Tavern is that you can always just head inside if the weather is lousy!

Food Truck Fridays at Phoenix Hill are from 5-9 PM on every second Friday of the month. They run until September. The best place to get information on Food Truck Fridays and other happenings with the food truck crew around town is on the Louisville Food Truck Association Facebook page.