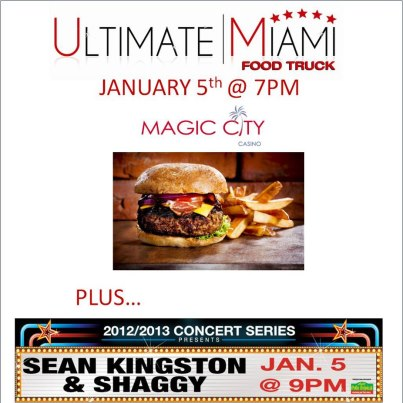 They’re in our parks and on our streets, doing their best to fill our bellies— and now they’ll be competing for the title of Ultimate Miami Food Truck.

Eight finalists will pamper your palates with cuisine that includes gourmet tacos and high-end grilled cheese.

Contestants will compete over two rounds for a cash prize of $5,000 and the title of the Ultimate Miami Food Truck.

Brian Mullins, co-owner of Ms. Cheezious, who has received numerous accolades for his coveted grilled bleu and bacon on sourdough, said that there are always fans who eat from our truck three times in the same week.

Each contestant has drawn upon culinary and entrepreneurial passions, using social media and niche markets to build a fan base and broaden their outreach.

Brett Chiavari, owner of B.C. Tacos, said he will give people a twist on the standard taco with 12 gourmet variations such as the BBQ pulled pork and fried avocado tacos.

He then checks his Twitter and Facebook accounts after each event. “You get five or six new followers,” Chiavari said. “You recognize the faces [of customers] and get instant gratification.”

However, loyalty isn’t the only concern for this food truck challenge. Miguel Kristaly, of Health Nut on Wheels, said he relies on a nutrient rich Paleolithic-based cuisine with grass-fed meats over a bed of sautéed veggies.

“Eating healthy is not about a diet, it’s about eating well and making it a lifestyle,” he said.

Regardless of style there will be two rounds, one victor.

In the first round attendees will taste two dishes from competing food trucks of their choice. Four trucks will then move to the next stage where judges like Aurora Rodriguez, the editor of Where Magazine South Florida, will decide on the Ultimate Miami Food Truck winner.

The competition is followed by musical acts by world-renowned reggae artist Sean Kingston and Grammy Award winner Shaggy at 9 p.m. at the Magic City Amphitheater.

Tickets for the Ultimate Miami Food Truck competition are $40 and include two meals from competing trucks, a beverage and 25 percent off all eight food trucks after the competition.

Additional ticket packages are available and include admission to the Ultimate Miami Food Truck competition and premium seating for the Sean Kingston and Shaggy concert. Tickets may be purchased at www.theultimate miami.com.