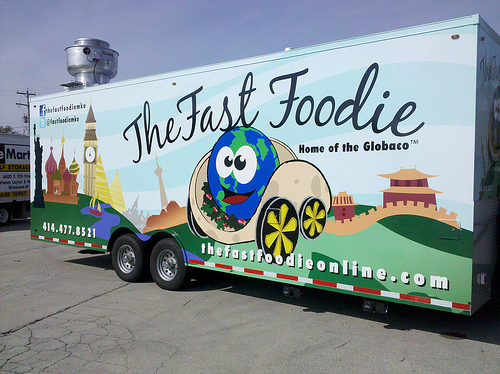 MILWAUKEE — Over the past several years, there’s been a big trend emerging in southeastern Wisconsin’s food scene — the “mobile meal movement.” Creative culinary types are starting businesses, but they don’t stay in the same place for long!

As with the locations, mobile menu offerings can change from day to day, and they run an ever-expanding gamut.

While mobile food operators say they are making money, that’s not what drives most of them.

“Our feeling is, if you have the love and the passion for it, then it’s all good,” The Gouda Girls Tina Tonn said.

Craig and Deb Mengeling brought their Hardwood Cafe from Florida to Milwaukee. The couple says mobile units offer a relatively inexpensive way to get into food service and say they are happy to be amongst Milwaukee’s masses.

“You can’t take a truck out by itself and make any money. You have to have three to four trucks and then people come because they want the variety,” Craig Mengeling said.

Milwaukee’s food truck competition is described as friendly and growing.

“The past five years, it’s really grown. They said this past year it has grown the most — not only the number of trucks, but the quality of trucks,” Heatherlee Muehlius with Hattie’s Truck said.

Jeppa Joe’s owner, Jeff Steckel, started his operation months ago. He says both the amount of time and effort he expends surprised him, as did the response.

“I got into this thinking this will be easy, work 11 to 2, no problem! It hasn’t worked out that way. It’s definitely surpassing what I expected so far. I’m busy all the time,” Steckel said.

Jackie Valent Lucca says she left a six-figure job to move into the mobile food world, with her “Fast Foodie” truck. Lucca also serves as the Founder and VP of the Milwaukee Food Truck Association.

“We wanted to work with the city from Day One, and really let them know that we want to be a part of the landscape of the city, and not be an adversary,” Lucca said.

The Association advocates on behalf of vendors as more of them move to Milwaukee and other area municipalities.

“People will say ‘I wanna hire a food truck, but where in the world do I find one?’ So this is really that one-stop-shop to do that,” Lucca said.

Milwaukee’s food trucks range in price from under $10,000 to more than $50,000. The cost of licenses varies from operation to operation.

Currently in Milwaukee, there are more than 500 food peddlers licenses.

Milwaukee’s Health Department inspects the food trucks as part of the permit process and does random checks throughout the year.