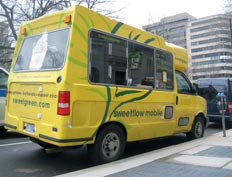 As mobile quick serves grow in popularity across the country, operators should be prepared for a host of challenges when running one.

Alternatively known as lunch trucks or food wagons, these horse-powered kitchens might seem like the cure to the common restaurant operator’s daily headache, but nothing could be further from the truth.

“Imagine the workload and times it by 100,” says Molly Taylor, who drives her Sweets Truck around Los Angeles.

Lower start-up costs notwithstanding, the burgeoning mobile food business has its fair share of stressors. Permits can be hard to come by—especially in New York’s lottery system—and, with long heating and cooling periods for ovens, opening for business every day is anything but a turnkey operation.

“Don’t be fooled,” says Joe Jiannetto, a 12-year veteran on the Manhattan circuit with three pizza trucks. “It’s a 16- to 18-hour day. It’s definitely not easier than running a restaurant.”

For one thing, restaurants don’t have to fight traffic or worry about dislodging an oven because the car in front stopped short. Then there is the eternal issue of finding a spot. Imagine you had to park your business everyday. While most trucks manage to stake out a patch of asphalt, they are not always warmly received—especially if they end up idling in front of a brick-and-mortar restaurant.

“That’s the biggest stickler,” says Mitchell Collier, part owner of Green Truck, which serves organic fare to Los Angeles pedestrians. “The restaurants think we’re taking business from them. But it’s our right and we pay our dues to go and do business.”

But that logic doesn’t always prevail. Taylor makes a point of not parking her Sweets Truck in front of Starbucks or other bakery cafés. But during a busy arts walk in February, she couldn’t avoid setting up in front of an open restaurant.

“I felt like I walked into a political nightmare,” Taylor says. The owner “was asking any cop she could find to cite us.”

Despite the inconveniences special to the mobile-kitchen business, there is no denying it has taken off in part because of its advantages. While not cheap, revving up a food truck is more affordable than opening a restaurant, requiring about 30 percent less capital, Jiannetto says.

And parking wars aside, prime real estate does not come at a premium.

“Location, location, location is what they always say,” says Collier, who enjoys the freedom his veggie-oil-powered trucks give him to spread Green Truck’s environmental message across Los Angeles. “If I had a fixed location, I couldn’t go out and green Hollywood.”

It’s a 16- to 18-hour day. It’s definitely not easier than running a restaurant.”

Mobilecravings.com, which launched in September, is looking to become one of the first sites to index food trucks on a national level. Users can search by city and food type and give portable eateries a star rating. Food-truck owners have profile pages with menus, Twitter feeds, videos, and pictures of their rigs, which are often well worth a second look.

However slowly, the image of the grimy lunch truck is giving way as the newer breed of mobile kitchens rolls across the country. And while the food-truck business is largely run by small operators, bigger chains have taken note.

Jeff Harvey, CEO of Burgerville, which introduced its Nomad food truck last July, says food trucks are not only cost-efficient, but also represent a new way to engage customers.

“There’s really an opportunity for a much deeper relationship with your market,” he says.

Burgerville’s commitment to mobile kitchens is “pretty strong,” Harvey says, and the Vancouver, Washington–based chain plans to expand to as many as five trucks this year.