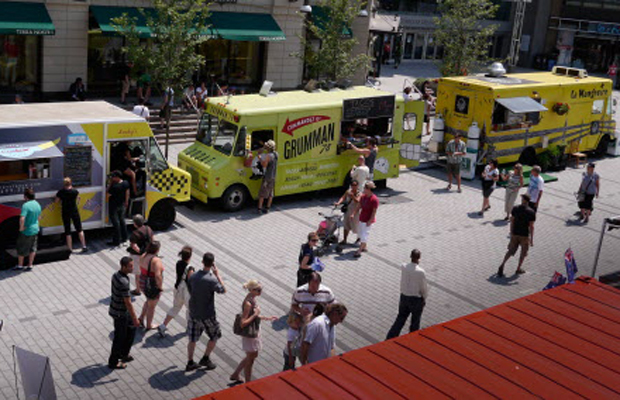 By Contributor  |  The Spec

MONTREAL This city, with its reputation as a gastronomic trailblazer, is carving out its own course when it comes to street food — just a little behind schedule.

Some in Hamilton, which has seen an influx of new food trucks and even a food truck festival in the past few years, might say Montreal is way behind.

After being banned for more than half a century, food trucks and carts are now allowed in Montreal and visitors can expect an array of options beyond the standard hot dogs and foot-long sausages.

Items like a Nutella (peanut butter) and bacon grilled sandwich, a crepe stuffed with chorizo, goat cheese or spinach, and a crispy pork belly taco served with apple slaw have become available around the city.

Decades of pent-up demand appeared to be unleashed late last week. Lengthy lineups formed at some locations on Montreal’s first day without a street-food ban.

Although food trucks in the Hamilton area have had to overcome some road blocks, including regulations governing how close they can set up to established restaurants, street food has become so popular in the Steel City that Ottawa Street celebrated its fourth year of the Sew Hungry festival. More than 20 food trucks served up their specialty dishes during the day-long festival. Hamilton’s newest food truck, Karma Chamealeon Veggie Culture Club, is actually Ontario’s first vegan food truck.

Montreal has also set some conditions around its street food.

Anyone hoping for a fix of traditional, cheap hot dogs and foot-long sausages will be disappointed. The trucks and carts have been pre-approved by a city committee with an eye toward quality and originality.

While Montreal has faced criticism for limiting licenses to higher-end fare, one food truck owner who helped spearhead the project says the new rules make sense.

“There’s no shortage of hot dogs and poutine in Montreal,” said Hilary McGown, one of the owners of the Grumman ’78 taco truck, explaining that traditional “casse-croutes” are easy to find.

“I don’t see why we have to keep reinventing the same old things.”

Montreal’s street-food ban, unique in Canada, was installed in 1947 for sanitation reasons. Attempts to lift it over the years have been thwarted because of cleanliness concerns and resistance from restaurants worried about lost business.

In the past few years, though, Montreal has been catching up with other cities.

Grumman ’78 got its wheels rolling in late 2010, and the next summer its lime-green truck began popping up wherever it was allowed — street festivals, parks, and private parties.

The next summer, there were about a dozen trucks set up during the city’s Just for Laughs festival. This spring, there are already about 30 at festivals.

As part of the pilot project, trucks will be allowed to set up at nine locations from June 20 to Sept. 29.

To be eligible, vendors must have a production kitchen or restaurant that meets sanitation requirements. The locations, which include parks and city squares, are away from existing restaurants to avoid direct competition.

Alexandra Graveline, a spokeswoman for Tourisme Montreal, which counts restaurants and hotels among its members, said the city has found the right balance with the new rules.

“We think it’s a good compromise,” she said, explaining that the food trucks reflect the city’s reputation as a gastronomic hub without hurting the restaurant business.

“We’re very enthusiastic because we think that the people who are deciding to use a food truck aren’t the same people who will sit down in a resto for a few hours.”

Dustin Gilman, a food blogger who has been following the developments closely, said he’s excited to see what Montreal’s chefs can come up with over the next few years.

He pointed to the variety of food available — ranging from meatballs to dim sum — and the talent involved, including a group of cooks from the internationally-praised Au Pied De Cochon, famous for its use foie gras.

McGown, who also runs a restaurant in addition to the taco truck, is quick to admit there won’t be cheap eats like the ones found in Mexico, where the idea for Grumman was born.

But she believes most food lovers will be prepared to hand over a little more cash.

“People are more interested in fresh and organic and that kind of food costs money,” McGown said.