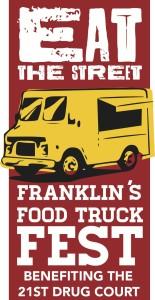 Eat the Street Food Truck Festival, Franklin’s first food truck-themed fundraiser, returns for its fourth year from 5 to 9 p.m. on Friday, May 8 at Bicentennial Park in Nashville.

The annual event benefits the 21st Drug Court, an alternative sentencing program in the 21st Judicial District, which allows local nonviolent offenders to complete a two-year, court supervised recovery program in lieu of or in addition to traditional sentences.

An estimated 10,000 attended the event in 2014, which was held on Main Street in Franklin.

More than 20 food trucks and carts have signed up for the event so far.