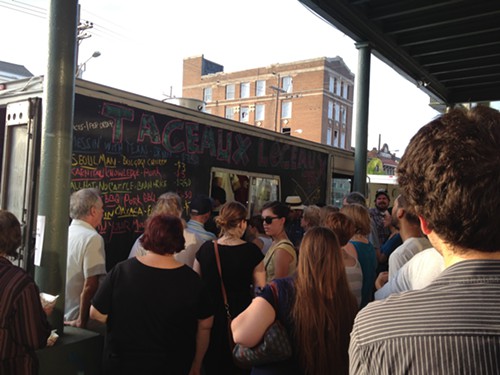 “I guess you could call us ‘truckees’,” said Rachel Wong, a schoolteacher and self-proclaimed food-truck addict. She was just one of more than 100 enthusiasts who gathered at the Ashé Cultural Arts Center (ACAC) in Central City last night for “Let the Food Trucks Roll,” a rally aimed at changing existing city laws regarding food trucks.

While food trucks lined the street of Oretha Castle Haley Blvd., participants crowded inside the ACAC to hear presentations. Alan Williams, senior community manager of the civic engagement company Neighborland, said, “The rules and regulations that affect [this] industry are outdated and obsolete.”

These laws include a ban on operating in the Central Business District, a cap of 100 food truck permits for the city, a ban on seafood being sold on the trucks, a maximum of 45 minutes that any food truck can spend on a specific block, and a “two football field buffer” — meaning that food trucks cannot operate within 600 feet of any restaurant.

Williams said that the 45 minute maximum makes it difficult for trucks to operate, since it takes them about 30 minutes to get their supplies set up. He also said that the 100 permit cap (which includes Lucky Dog stands and produce stands, leaving room for about 15 food trucks currently) makes it difficult for new trucks to go into business. His website (www.neighborland.com) allows members to post ideas for what policies they would like to change and how to change them.

In other cities, some have said that by allowing food trucks to multiply, local brick-and-mortar restaurants would lose business. In a New York Times article last year, one restaurant owner in Brooklyn said, “It’s ignorant of people in the community to think that buying from food trucks instead of from local restaurants doesn’t hurt the community. There’s just not enough to go around right now.”

Williams, however, does not believe that the same is true in New Orleans. “We’ve talked to a lot of [New Orleans] chefs, and they seem to see food trucks as a complement” to what they do, Williams said, because “restaurants here have experience here working offsite,” with many setting up booths and stands at music festivals and parades. Therefore, Williams believes, “they see food trucks as an opportunity” for both the city and for their own expansion.

On the sidewalk outside the ACAC, the air was jovial. It was also smokier, as seven food trucks opened their doors and fired up their stoves. The crowd — some of whom harbored ambitions of opening their own food trucks, and others who were just looking to eat — moved en masse to the packed lines on the sidewalk of O.C Haley Blvd. At the rally, many customers waited almost 45 minutes, longer than they would at many restaurants, to receive meals that generally ranged from $3-$7.

“I love what’s going on, that it’s bringing people together to enjoy food and the weather,” said Gina Davison, a New Orleans resident who says her dream is to open a food truck. She had garlic truffle fries loaded with Parmesan cheese.

Rachel Wong believes that the food truck culture has become so popular because “people like that it’s outside. It’s a novelty, and people like novelties.”

Eric Theard, a former chef at Dickie Brennan’s Bourbon House and now the operator of the Foodie Call food truck, said, “We’re only taking business away from restaurants because their food should be better. Our Number One goal is (the) quality of food.”

The food truck rally, a partnership between the New Orleans Food Truck Coalition, Neighborland, and Nolafoodtrucks.com, is trying to build coalitions and good relationships with the community. “Once we have enough support from our neighbors and businesses,” said Williams, “we will present our ideal provisions to City Council staff.”