Summer brings events. With those comes Poco Más Tacos, the food truck that is seemingly everywhere slinging hot and tasty tacos from their sky-blue food truck.

This marks the second season in the Adirondacks for Sarah King and Josh Zack, the California transplants who rolled out the business last spring, making them one of just a handful of trucks in the region.

So what does it take to operate what is fast becoming a regional staple?

“Food trucks are their own beast,” Zack said.

King spends a day-and-a-half prepping for the weekend gig, which runs from Thursdays to Saturdays.

“It’s an all-encompassing weekend, to say the least,” King said.

The couple start the day by pressing tortillas together, taking two hours to crank out 400.

As the season heats up, the number will creep from 600 to about 900 per week during peak season.

King makes the dough balls; Zack presses and pre-cooks them on the griddle before then packing them, allowing the steaming process to continue in their packages. Meanwhile, King will finish the condiment prepping — including making salsas, topping off their proprietary spicy carrots, shredding cabbage, onions and cilantro, and cutting up lime wedges, chives and whatever else happens to be in season.

The pair uses locally-sourced vegetables, including those grown in their own garden, which means they need to keep a close eye on their inventory, and start rationing toward the end of the weekend.

Poco Más Tacos goes through 30 pounds each of beef and pork each week.

The ingredients are stored at the Hub on the Hill in Essex, which the pair uses as their staging area.

One by one, items get ticked off the checklist:

The pair then hits the open road. From the tortilla-making process to landfall is about three hours.

“Once we get into a routine, we just go there mentally,” King said.

The emerging season will see the duo on the road from now until August.

Once they reach their destination, it takes about 10 minutes to park the truck. Then it’s a matter of cleaning, unpacking items, a half-hour process.

The next three-to-four hours are a blur — King taking the orders; Zack behind the griddle.

The pair enters a zone. Meat sizzles. Lines ebb and flow. Time flies. And once the smoke clears, the pair looks out over a sea of people eating their food  — tacos, quesadillas, salads and authentic salsa recipes passed down from a friend.

Zack said he was proud that he can get a plate out in less than three minutes — even with long lines. 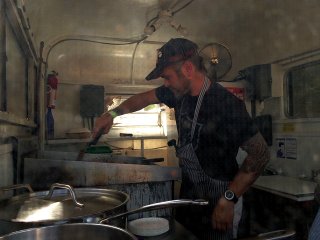 “No matter how long the lines get, we can pump it out,” Zack said.

Zack cranks up the griddle to 450 degrees.

But that’s not the only heat generated during rushes.

Despite their easygoing chemistry, it can get tense in the cramped truck.

“We definitely growl at each other,” King said.

“For being in such tight quarters, I think we do exceptionally well,” Zack said.

Sometimes it’s tough to take a pause. Zack is a diabetic, and often needs to step back when his blood sugar gets up.

King, too, says she often needs a reminder to put her health first —

While they find it frustrating when they run out of items, equally nerve-wracking is when crowd chatter and loud music drowns out when they’re calling out orders.

But the benefits of working in a small community, said the pair, is everyone knows everyone, and they can enlist people to deliver meals… or even to refill condiments when the need arises.

Once the smoke clears, the pair pack it in.

Then it’s back to the Hub, where they put the perishable items back into storage.

The business, by all accounts, has been a hit and the California couple are the darlings of the local food scene.

This summer, the 16-week season will see them at Soundwaves Concert Series at Ballard Park on Thursdays. Saturdays will see them at the Ausable Brewing Company in Keeseville, a scene that regularly draws hundreds of people, tourists and locals alike, to the hotspot.

Poco Más Tacos is also transitioning to a number of private events, which are more lucrative because they can plan ahead, right down to the exact number of guests, a measure which eliminates food waste.

These events, said King, are really the ideal model to which they are gravitating.

Their current model of using organic, pasteurized meat paired with local greens upends the traditional paradigm of food carts, which often buy lots of ingredients on the cheap and let it rip by turning out a lot of product.

But an expansion isn’t in the works.

“It terms of expanding our operations, we’re not looking to grow any bigger than we are,” King said.

Poco Más Tacos is not a long-term, retirement plan, said the pair. While it’s a nice way to supplement their earnings in the summer with a value-added product, King and Zack have started a farm in Westport, KZ Farm, on a 48-acre parcel of rolling farmland.

King said she looks forward to growing produce and raising livestock; Zack, a builder, said he’s excited about the winter downtime to tinker with projects.

Zack said a great thing about the local food scene is that everyone leans on each other — KZ won’t try to do everything, which means that they will still try to procure ingredients from their friends and counterparts.

But as long as they can make the truck work financially, they’ll operate it on weekends, perhaps even hiring a staffer.