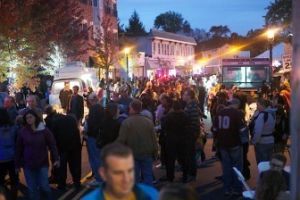 What better way to welcome in the fall than to indulge on an evening of great food, live music, and local craft beer? On Wednesday, October 7 from 5 pm – 10pm, the Seton Hall Village Committee will once again host its highly popular, second annual Food Truck and Craft Beer Festival on Irvington Avenue.

This year, patrons may notice that the festival has nearly doubled the number of food trucks that will line Irvington Avenue, with an increase from eight in 2014 to 15 this year. According to Doug Zacker, Chairman of the Seton Hall Village Committee, this increase is due to how wildly popular the festival was last year, attracting nearly 2,500 attendees. The trucks will serve everything from BBQ to tacos, cupcakes to waffles, and even international foods and farm to truck options that offer healthier meals.

In addition to the food trucks, a craft beer garden – sponsored by South Orange’s Gaslight Restaurant and Brewery – will also return to the festival.   Open to adults ages 21 and over, the garden will serve local New Jersey craft beers as well as Gaslight’s own local brews.

Live music will accompany the festivities on Irvington Avenue, with three l acts from local bands Brother Valiant, Wyland, and Random Test, who will play on two separate stages.

This year’s festival was moved back a week to coincide with Seton Hall University’s Seton Hall Weekend, in an effort to strengthen the connection between the university and the Seton Village business district. Zacker noted: “What better way to familiarize students, parents, and alumni to the district than to give them a firsthand look at their new neighborhood and the local businesses they have the opportunity to patronize?”

“The Board of Trustees saw the untapped potential on Irvington Avenue and we’re very committed to seeing this neighborhood and business district thrive,” said South Orange Village President Sheena Collum. “We’ve got some tremendous energy coming from residents and businesses, and we’re thrilled to capitalize on all the momentum. This particular event is about bringing people to the corridor to highlight all of the positive change and celebrate the efforts of those who have put it into place.”

Irvington Avenue will be shut down to vehicular traffic on Wednesday, October 7 between 3 pm and midnight. Detours will be set up to redirect traffic and attendees are encouraged to walk to the festival as parking will be limited.