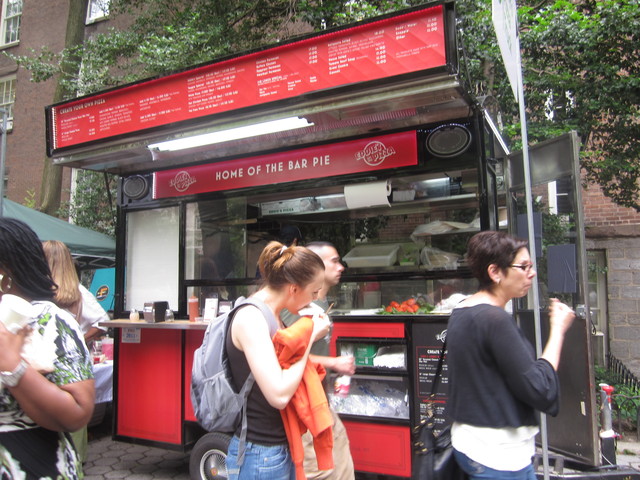 UPPER WEST SIDE — Another city park on the Upper West SIde is set to get a food cart, but this one is more humble than some of its gourmet neighbors.

The cart, expected to open in the spring, will be Sakura Park’s first food vendor. It joins a growing list of food carts and trucks in Upper West Side parks, though others offer fancier fare.

Earlier this fall, the Vendy Award-nominated Eddie’s Pizza won a contract to operate a cart seven days a week in Richard Tucker Park, at West 66th Street and Broadway. This past summer, a Screme Gelato cart opened in Verdi Square at West 72nd Street and Broadway.

Last fall, Parks brought four gourmet food trucks to Tavern on the Green’s terrace, but the trucks left in October 2011 after the Parks Department didn’t renew their contracts. Parks also sought a vendor to operate a cart with a “Victorian-era” look at Central Park’s Cherry Hill.

The recent increase in food carts and food trucks on the Upper West Side has been a source of concern for some locals, who say the vendors clog sidewalks, and in some cases bring noise, trash and air pollution to the neighborhood.

In response to neighborhood complaints, police recently cracked down on illegal activity by some of the vendors. City Councilwoman Gale Brewer has suggested using GPS technology to track the location of food vendors.

Community Board 7 recently started a survey of food trucks, carts and other street food vendors on the Upper West Side.

Some hot dog vendors pay the Parks Department more than $100,000 a year for prime vending spots in and around Central Park, though the more isolated Sakura Park is cheaper.

Abyan Food Services of Queens will pay Parks a total $47,921 for its five-year contract to serve in the park.