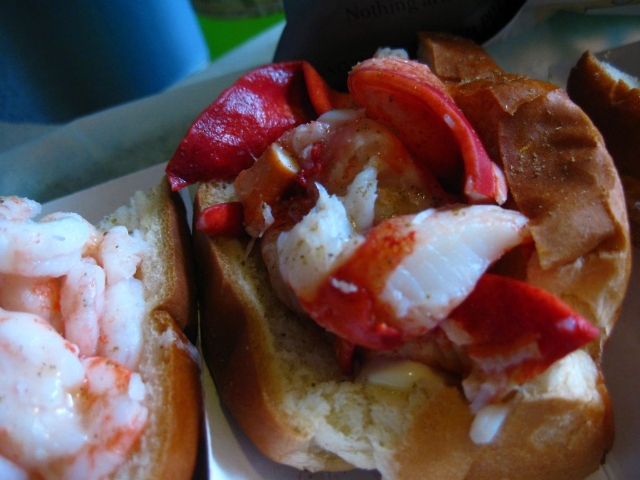 MURRAY HILL — The Midtown lunch crowd clawed their way to Luke’s Lobster truck Monday, braving long lines for a taste of the beloved chain’s signature seafood rolls on its first day on the streets.

The famous lobster chain’s “tricked-out” lunch truck was such a hit with hungry fans that it sold out of its overstuffed lobster and crab rolls — and even ran out of bags and to-go boxes — two and a half hours after setting up shop at the corner of West 52nd Street and Lexington Avenue.

“I’m just a big fan of lobster in general,” said Christine Choi, 24, who works nearby and lined up with dozens of others for a taste on her lunch break Monday afternoon.

A lobster roll from Luke’s.

“It’s been crazy,” said Holden, who said there was already a line around the block when the truck opened at 11:30 a.m.

By 1:45, shrimp rolls were the only seafood left, and staff were forced to turn away hungry customers who’d arrived too late.

“It must be good because it’s sold out,” said a disappointed Granville Murrell, 61, from Brooklyn, who’d been looking forward to a lobster roll after scoping out the truck on his way to an appointment earlier in the afternoon.

He vowed to return for a second try later this week.

Jill Cassidy, who lives nearby in Sutton Place, and said she usually has to travel all the way uptown for a bite and was thrilled to learn Luke’s Lobster had come to her.

“I could have downed one in a heartbeat,” she said, walking away empty-handed. “They’re fantastic. It doesn’t get any better.”

Fellow Luke’s fan Janet Menaker, 35, who rushed down to the truck after hearing from colleagues that it was in the neighborhood, decided to settle on a shrimp roll to satisfy her craving.

“I couldn’t resist,” she said, as she waited for her order to arrive. But she added that normally, she’s afraid of about street vendor food — especially fast-spoiling seafood.

“I can’t believe I’m eating seafood from a truck. I’m only doing it because it’s Luke’s,” Menaker said.

Holden’s buttery, spice-dusted lobster comes fresh from his father’s seafood company in Maine, as does everything else sold on the truck.

He opened the first Luke’s Lobster in the East Village in 2009, and last year added locations on the Upper East Side and Upper West Side. Luke’s is also available at the Hester Street Fair and will be coming to the Financial District later this month.

The team expects to run the truck Mondays, Tuesdays, Wednesdays and Fridays in locations throughout midtown.

Hungry New Yorkers can track the truck’s comings and goings on Twitter at @LukesLobsterNY.