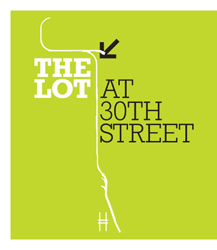 New York’s High Line was already a big draw for tourists and locals alike, particularly when it finally gets around to being comfortable to be outside again. And while the opening of the second section of the High Line was also destine to attract flocks of people, if not outright floods, it’s sure to be even more crowded with this week’s announcement by the project’s organizers, Friends of the High Line.

This summer, they’ve been lent an empty lot on the corner of 15th St. and 10th Ave. by developers who plan to start building a residential building there later this fall. Before that gets built, the lot will be converted into “The Lot,” a temporary bar and event space, all overseen by celebrity chef Tom Colicchio and designed by the original High Line crew, James Corner and Diller Scofidio & Renfro. The bar, called The Lot on Tap, will reportedly seat around 350 and serve “domestic wines, local beers, and non-alcoholic sodas” and “will be located directly under the High Line, with the historic structure’s steel girders flanking either side of the bar’s counter.”

For food, Colicchio will curate a revolving set of food trucks that will pop in to feed the hungry, parched, or drunk. These are already set to include favorites like Red Hook Lobster and the recent NY arrival, Coolhaus. AOL has also latched on and will be running something called Rainbow City, a temporary installation that will offer live music, film screenings, and other usual outdoor fare. So all that said, if you’re planning to swing by this summer to see the new wing of the High Line, expect some crowds. Not that you weren’t already.