By Ethan Fletcher  |  Inside Scoop

Off the Grid is starting up yet another East Bay weekly market, this one in Oakland’s thriving Uptown neighborhood. The San Francisco–based food truck organizer will begin operations at Williams Street and Telegraph Avenue near the Fox Theater this coming Monday, July 14, from 5 to 9 p.m.

And in addition to eight biweekly-rotating food trucks, including such popular vendors as Curry Up Now (Indian street food), Doc’s of the Bay (burgers), and El Sur(empanadas), there will be a special effort to tap into the district’s reputation as one of the Bay Area’s musical epicenters. According to Director of Business DevelopmentBen Hamlin, Off the Grid will work with various partners, such as the Museum of Art and Digital Entertainment and Oakland Museum of California (OCMA), to schedule rotating musical programs from 6 to 8 p.m. each week. 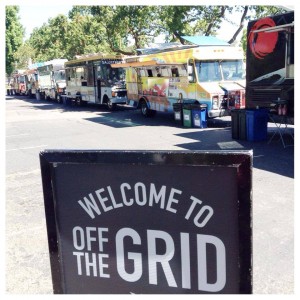 “Uptown has this really interesting history of music, and currently there are a lot of cool things happening, between the Fox and New Parish theaters, record stores such as Funky Soul Stop—even Youth Radio and Pandora are located around there,” says Hamlin. “We were looking to reach out and showcase some of that. Oakland is very much home-grown with an Oakland-based culture, and we wanted a market that was unique and expressed the identity of Uptown.”

For example, at the inaugural market this Monday, OCMA’s “mobile museum” Rover will be on hand to promote the museum’s (excellent) Vinyl exhibit, while the owner of the nearby Funky Soul Stop spins some of his own vinyl.

The new market in Uptown marks a recent surge into the East Bay for Off the Grid over the last couple years, including new markets in Alameda, downtown Oakland, north Berkeley, El Cerrito, Concord, Pleasant Hill, and Pleasanton.

And Hamlin says he anticipated opening at least one more location in the East Bay before the end of August.