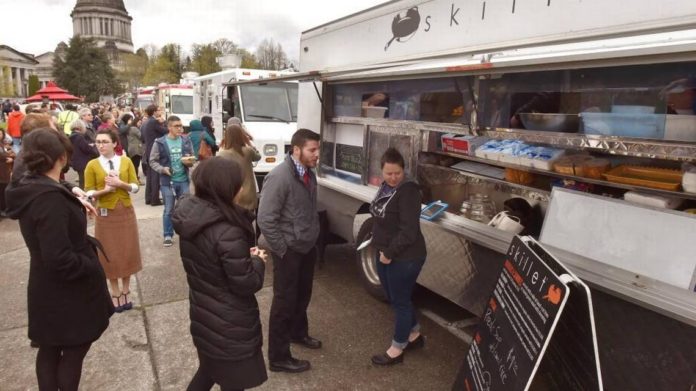 By Editorial Board  |  The News Tribune

How does one explain the rising popularity of filling one’s belly from a food truck? It could be that people like to support low-budget go-getters blessed with equal parts culinary talent and entrepreneurial spunk. It could be a throwback to the childhood summer thrill of being served from an ice cream truck window.

Whatever the reasons, mobile eateries are a phenomenon not just in the Puget Sound region, but around the country. More than 4,000 food trucks operate in nearly 300 cities, according to the U.S. Chamber of Commerce Foundation. Pierce County has dozens of licensed operators, doing peak business at summer food truck festivals from Tacoma to Gig Harbor, Puyallup to Spanaway, while eking out a living the rest of the year.

One sign that food truckers are getting their act together occurred last spring, when they brought their road show to Olympia. From Washington’s potato and dairy farmers they learned the route to political influence runs through the stomach. And voila, the first-ever Food Truck Lobby Day was staged.

That eat-and-greet is already starting to bear fruit. A bill sponsored by several Republican state representatives, including Drew Stokesbary of Auburn and Melanie Stambaugh of Puyallup, would let vendors prepare all or most of their menu items aboard their trucks; under current state rules, they have to do much of their food prep at offsite servicing areas.

Food truckers are scrappy, creative risk-takers, and they’re easy to root for. A good case could be made that the state should help cut their red tape. It’s not unusual for four-wheel vendors to butt heads with the powerful restaurant lobby or run into obstacles put up by local governments, such as having to keep a minimum distance from brick-and-mortar restaurants.

Some legislators last year even discussed the concept of a “food truck bill of rights.”

But we’re not convinced House Bill 2639 is the best place to start. Cutting corners on health-and-safety regulations might go over like spoiled milk, especially at a time when outbreaks of foodborne illness such as norovirus have consumers on edge.

The risk of cross-contamination in tight spaces merits careful examination; perhaps a law can be crafted with adequate safeguards such as cold storage, sanitary equipment and water capacity, but it will take some convincing. And do most food trucks even have room for those extras?

There are other ways state leaders could help the nascent mobile food industry get a fair shake. Some communities are inflexible if not outright hostile to food truckers.

In October, the City of SeaTac used its food truck ban to put the kibosh on a collaboration between Sea-Tac Airport and mobile food proprietors. For the few weeks it lasted, the trial project was reportedly a hit with people stuck at the airport’s cell-phone waiting lot.

Utah put its flag in the ground as a food-truck-friendly state last year, adopting a law that allows vendors to operate in different jurisdictions with a single license.

Washington might not be ready for that, but it could take progressive steps — for instance, by revisiting a proposal allowing food trucks to serve beer and wine. That bill didn’t gain traction in Olympia a few years ago, but times they are a changin’.

The restaurant industry needn’t fear the moveable feasting trend; the public will never lose its appetite for being waited on in a comfortable sit-down environment. But food truckers shouldn’t be blocked from providing fair competition and a fresh dining vibe.

Some cities are slowly coming around; Puyallup leaders recently discussed a trial program torelax restrictions on mobile vendors, including where they can park.

State lawmakers might be able to help keep the movement rolling. They just need to focus on the right ideas — ones that aren’t politically too hard to swallow. 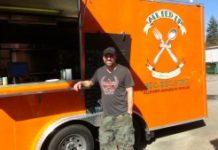 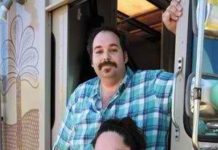