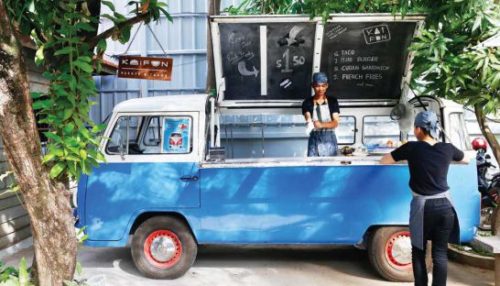 Kaifun, a new casual open-air eatery on Street 334, is all about options. Focusing on simple, unpretentious tapas, the menu is divided into four categories that sound like the pantry selections of a college dorm room: Rice and Noodles, barbecue, Pizza and Tacos. But the plates are all much better than they sound, and at $1.50 each, diners are expected to try out a few of them.

Co-owner and head chef Cristia Nou Picart – who developed the menu with help from Aitor Olabegoya, the award-winning head chef of Beijing’s Migas contemporary Spanish restaurant – said that the “idea for the restaurant was to be like a food cart, or a market.” Though originally from Barcelona, where he cooked at the Ritz-Carlton, Nou Picart spent five years living in Singapore, working as head chef at the Capella Hotel, before moving to Phnom Penh.

“Everywhere I ate [in Singapore] were food carts and cafeterias. I wanted to bring something like that to Phnom Penh,” said the bald chef, who is also the head chef at Kaifun’s sister restaurant, Doors Music and Tapas.

Kaifun’s culinary divisions are mirrored in the layout of the place, an airy, flowery courtyard featuring a barbecue cart, a clay pizza oven and a baby-blue VW Kombie van converted into a taco kitchen. The rice and noodles are made in the house space near the counter, where you order.

Care and culinary precision can be found in each of the four categories of snacks, but two of the barbecue items are the tastiest: the scrumptious, juicy pork belly marinated in miso and the sour sausage, a Thai delicacy involving a fermented pork sausage stuffed with sticky rice and grilled to perfection. For the meat eaters, they are not to be missed.

Another heavy hitter is the tacos, cooked in the refurbished Volkswagen. They’re soft-shelled affairs – in the LA food truck tradition – with juicy, flavourful pulled pork and fresh peppers in a corn tortilla made in-house.

While the tapas-sized pepperoni pizza satisfied with fresh, melted cheese and deliciously charred crust from the clay oven, it’s not the best in town. It would be wrong to call Kaifun a go-to pizza spot – unless you wanted the “chocolate pizza”; a kiddie pie of chocolate spread, diced bananas and mint leaves.

Kaifun only has one proper dessert option, but the “ice cream roll” – a frozen yellow cake hugging a block of vanilla ice cream, garnished with mint – is a simple yet well-executed finish.

With its small plates, Kaifun is a good spot for a light lunch. Most will need at least three or four plates to satisfy hunger pangs, and this is not the place for a serious gorge. But for those looking for a low-cost, tasty lunch with pleasant surrounds, Kaifun delivers.​​