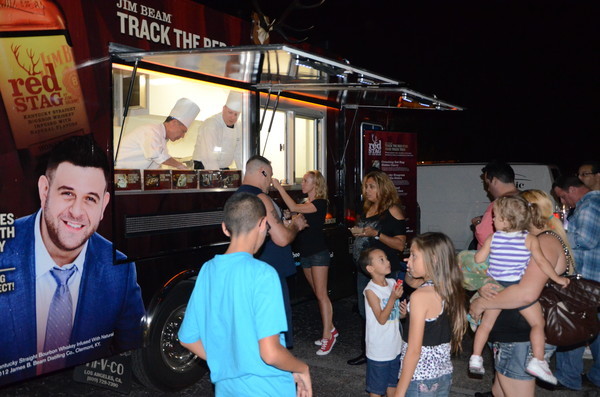 CLERMONT, Ky., — Red Stag by Jim Beam® is teaming up with food explorer and star of the popular Travel Channel® show “Man v Food,” Adam Richman, to bring the unexpected combination of Jim Beam’s newest flavor innovations and food to fans 21 or older across America through the “Track the Red Stag Food Truck Tour” this summer. Pairing his signature ‘no holds barred’ personality with a flavorful kick, Richman worked with Jim Beam to create unique menu items inspired by and prepared with the Red Stag expressions – Honey Tea, Spiced and Black Cherry.

“My partnership with Red Stag has been an opportunity to explore the innovative and delicious Red Stag bourbon expressions from Jim Beam, while tapping into some different culinary traditions to create some really unexpected dishes, like Kentucky Honey Tea Sliders,” said Richman. “I can’t wait to hit the road with the Track the Red Stag Food Truck Tour and introduce people to something different and unexpected with my signature Red Stag-infused fare.”

The Track the Red Stag Food Truck Tour hits the road in June, visiting three pre-determined cities – Tampa, Indianapolis and Chicago – and one that Jim Beam Facebook fans can help choose by voting online through June 15. In each city, food truck patrons 21+ will get a one-of-a-kind opportunity to taste Adam Richman’s unique Red Stag inspired recipes and get their photo taken in front of the truck to share on Facebook with their friends who are 21 or older. People who are 21 or older can even taste the new Red Stag by Jim Beam® expressions at participating bars in each area.

In addition to voting on the final Track the Red Stag Food Truck stop, fans can follow the Food Truck on the Jim Beam Facebook page as it makes its way through all four cities via an interactive geo-targeted map and find out where to taste the new Red Stag by Jim Beam® expressions by checking out the sampling tab. The Jim Beam Facebook page also offers access to all of the Red Stag inspired recipes Adam Richman created so fans can bring a taste of the Food Truck home. They can even check out the exclusive Red Stag by Jim Beam® cocktails created by Jim Beam mixologist, Bobby “G” Gleason, to complement each Food Truck dish.

“I love to cook and I love bourbon, so I am thrilled to launch a Red Stag-inspired food truck,” said Fred Noe, Seventh-Generation Jim Beam Family Distiller and great-grandson of Jim Beam. “Bourbon is such a versatile spirit, particularly our Red Stag portfolio of bourbons infused with natural flavors – Honey Tea, Spiced and Black Cherry – and this just shows how accessible it can be to all kinds of different palates, whether you’re a seasoned bourbon drinker or just whetting your appetite for the category.”

Red Stag Honey Tea, Spiced and Black Cherry are expertly crafted with four-year-old Jim Beam® Kentucky Straight Bourbon Whiskey – the world’s number one bourbon – as a base and infused with natural flavors through a unique artisanal process. All three expressions are authentic 80-proof bourbons that are perfect for those who haven’t considered bourbon before – or those who simply want to add a little flavor to their flask.

Red Stag by Jim Beam® is now available for a suggested retail price of $17.99 for a 750ml bottle. For more information about Red Stag by Jim Beam® or the Track the Red Stag Food Truck Tour, go to www.jimbeam.com/red-stag, visit us at www.facebook.com/JimBeam or follow us on Twitter at @JimBeamOfficial.