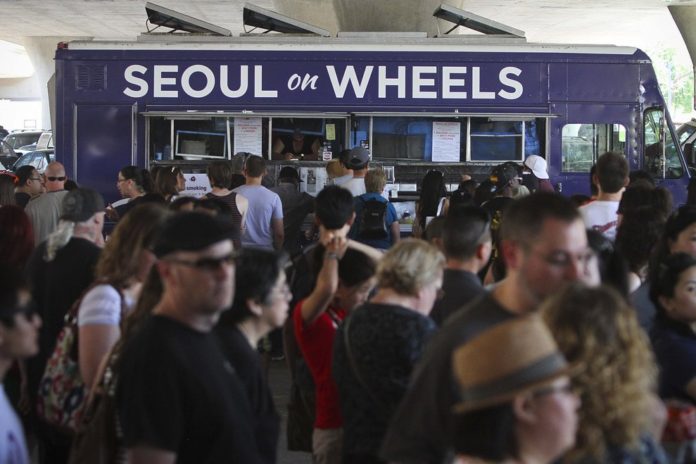 Sacramento could become the state’s next battleground in the national food truck craze if the city can’t find common ground for restaurateurs and mobile vendors at a key meeting tonight.

Food truck operators want city restrictions relaxed, especially a 30-minute time limit on parking in one location and a ban on operating after 6 p.m. in the winter and 8 p.m. in the summer.

But some brick-and-mortar restaurants worry about food trucks undercutting their businesses and operating at a competitive advantage. City officials and representatives of the two business groups are scheduled to meet in another closed-door session tonight, the eve of the city’s fifth SactoMoFo, a mobile food fair that promises to draw more than 30 vendors and thousands of food truck aficionados to Sixth and X streets Saturday.

Negotiations among city officials and the two industries, which have dragged on for more than a year, mirror the controversies that have erupted in other cities over regulations for a new breed of food businesses.

One sticking point in the Sacramento talks is a ban on food trucks within 400 feet of a brick-and-mortar restaurant. The interested parties have been discussing the establishment of “pods,” or sites, for mobile food trucks to gather.

The city is attempting to come up with rules that allow the two kinds of food businesses to coexist, but if food truck owners aren’t happy with the progress, some are saying they will enlist the legal clout of a statewide organization known for suing cities over food truck regulations.

Meanwhile, Elk Grove recently delayed making a decision on its food truck ordinances. Many of the 15 “new wave” of food trucks that operate in Sacramento also ply the streets of Elk Grove.

Sacramento’s current rules were crafted when food trucks were mainly ice cream and catering trucks or vans that served construction sites, said Brad Wasson, revenue manager for the city of Sacramento. But over the past few years, Sacramento has followed the trend toward “gourmet trucks,” where sandwiches, burgers, tacos and even fusion ethnic food is prepared on-site.

“With the recent phenomenon of nicer, more elaborate trucks, they can’t really vend in half an hour in one location,” he said. “The biggest concern is giving them more time in a certain spot, but not allowing them to be a mobile restaurant, parking all day at the same site, but without the capital costs of a traditional restaurant.”

He said councilmembers Jay Schenirer and Darrell Fong have been meeting with both sides to negotiate new rules.

Daniel Conway, public affairs director for the California Restaurant Association, said cities are trying to find a balance between the new and established industries.

While food trucks are a low-cost way to enter the food service business, the trucks don’t have to pay tens of thousands of dollars in start-up costs, licensing and impact fees that stationary restaurants pay, he said.

“We want to allow food trucks while maintaining the existing restaurant fabric,” Conway said. “With the economy, everyone’s concerned about making this work.”

Food truck vender Davin Vculek, owner of Krush Burger, said food trucks aren’t a threat to existing restaurants and should be seen as an economic driver.

“We have a clear way to start up some new businesses and create some jobs,” Vculek said. “Their argument doesn’t hold water anyway. Show me any restaurant that’s closing down because of food trucks.”

Vculek said he would like to see regulations allowing food trucks to park outside of downtown bars and clubs after their 2 a.m. closing time to give patrons who have been drinking an opportunity to sit and eat before leaving the area.

He said the area’s food truck operators may form a local chapter of the California Mobile Food Vendors Association. That group has been brokering deals with many cities in the state for amending and clarifying food truck rules. It also recently sued the city of Monrovia for its refusal to change what it sees as outdated regulations.

Elk Grove has been holding public workshops with residents and business owners for several months to amend its food truck rules. The council last week delayed action until next month to allow the California Restaurant Association and the local Chamber of Commerce time to form an opinion on the issue.

Taro Echiburu, Elk Grove’s planning director, said current city regulations allow food trucks to operate only from 7 a.m. to 2 p.m., and force them to move at least 1,000 feet every 15 minutes. “These are outdated regulations for what the industry has evolved into today,” he said. “We want to help and be responsive to the operators so our citizens can benefit from this new industry.”