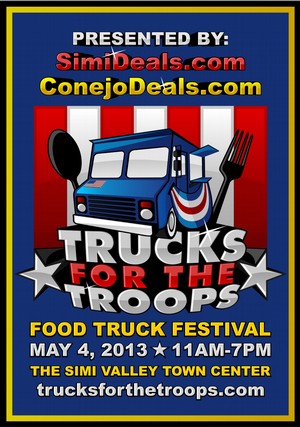 Five-thousand plus local residents are expected to attend the Second Annual “Trucks for the Troops” fundraiser benefitting local Simi Valley charity FOR THE TROOPS. Fifteen gourmet food trucks have committed to the event with each truck donating 10% of their profits directly to For The Troops. According to the Ventura County Health Department, “Trucks for the Troops” will be the largest gathering of food trucks ever to take place in the Simi Valley. In addition, every one of the expected 5,000 plus attendees will donate an item for a soldier fighting overseas, which will be incorporated into a For The Troops care package. The event is sponsored by local daily deal sites SimiDeals.com and ConejoDeals.com, winner of the 2012 Conejo Valley Business of the Year Award.

Wendy Jaffe, CEO of ConejoDeals.com and SimiDeals.com, explained why Simi Deals is sponsoring Trucks For The Troops. “Conejo Deals and Simi Deals already support dozens of local charities and schools through our Give Back Program and have donated more than $150,000 back to the community in less than three years. We knew that with our large local database, we could get thousands of our members to donate a For The Troops care package item. Last year, approximately 1,800 people attended the event and eight truckloads of donated care package items were collected. We anticipate that generous local residents will again donate thousands of food items, DVDs, CDs, magazines, batteries, socks, and other items from the For The Troops wish list.”

Summer Johns, Simi Deals’ Community Liaison and Trucks For The Troops Coordinator added, “Due to the success of last year’s event, we have invited over 20 local vendors to the event, and will have a 40 ft. video game bus. In addition, we are excited about the performance by the Simi Valley Cultural Arts Center, a Meet and Greet with the Simi Valley Police K9 Unit, performances by local dance teams, and great music by local bands Hoodie Weather and BOOG (Band of Old Guys).

A list of participating food trucks is listed at the TrucksfortheTroops.com website and includes favorites such as Haunt Dawgz, Sweet Arleen’s, The Grilled Cheese Truck, Jogasaki Sushi Burrito, White Rabbit, MacOlicious, Ragin Cajun, Sam Choy’s Pineapple Express and many more. There is also a fan page at www.Facebook.com/Trucksforthetroops.

For the Troops has donated over 74,000 care packages to soldiers fighting abroad and has been featured on CNN. More information on For The Troops can be found on their website Forthetroops.org.