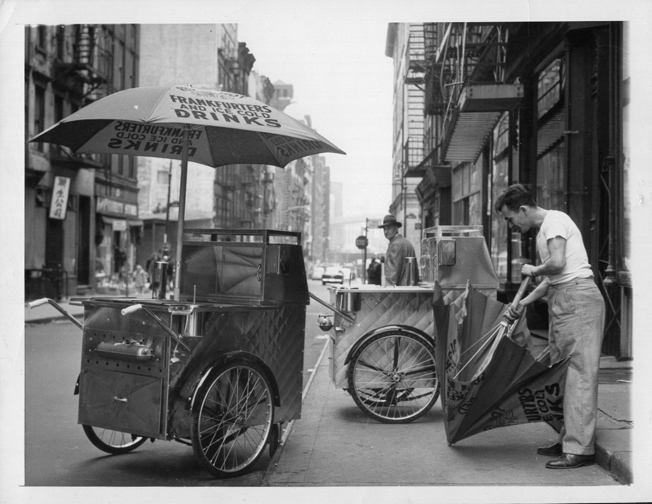 Worksman Trading Corp., the parent company of Worksman Cycles and Worksman Vending Units, is the oldest cycle manufacturer in America, established in 1898 in New York City. In fact, the original Worksman facility was located on the very footprint of the World Trade Center.

Worksman has been the leading manufacturer of Industrial Cycles for decades serving the needs of the U.S. Military, leading manufacturing companies and small businesses across America and the world. Legendary models include the iconic Good Humor Ice Cream Tricycle and Cart, the New York City Pizza Delivery Bike and our Industrial Tricycles seen in shipyards and factories worldwide.

Worksman Vending was created when Worksman Trading purchased Admar Vending in the 1990’s. Admar, established in 1946, was the originator of the quintessential New York City Stainless Steel Hot Dog Cart. Its carts established the New York street food industry and have remained an iconic feature of the “Big Apple.”

Each unit is custom-made to your exact specifications and needs and is built by master craftsmen in our New York City manufacturing plant.

Whether you require a roadside hotdog truck or a world class gourmet kitchen on wheels, a Worksman Mobile Unit will keep on delivering profits for years!

All Worksman Vending Units are still made in our 100,000 square foot facility in New York City which occupies an entire city block in Queens. Master craftsmen, many there for decades and who work beside sons and relatives, are proud to be part of our century old heritage of building the best products of their kind available. That heritage is not only passed down through generations of workers, but through their management as well. Worksman is still a family-owned and operated business with the original families of Worksman Trading and Admar Vending still running our business.

The Company They Keep

At Worksman, they are most proud that we have helped thousands of people create their own business and support their families. Many of these entrepreneurs have expanded to include other family members or have passed on their business to a child. These businesspeople have counted on Worksman to be there for them and know they will be there in the future.

They are also proud to manufacture the vending units of choice for leading companies in provisions, ice cream, the beverage industries. That’s why you’ll find their units not just on the street, but in supermarkets, arenas and stadiums, and at fairs, street events and exhibitions. Names such as Nathan’s, Good Humor, Hebrew National, Sabrett, Vitamin Water, Sobe and many more leading corporations.

They’re Talking About Us

How many other vending manufacturers have been featured in stories on CNN, ABC World News, The Wall Street Journal, The New York Times, The Financial News, National Public Radio, the BBC, Crain’s, New York Business and of course Mobile Food News?