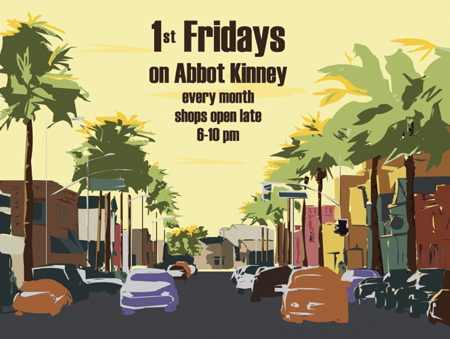 Fans of Los Angeles food trucks, rejoice! Bigfoot Entertainment, a global production company with headquarters in Venice, Calif., is offering a home to the popular mobile eateries in its parking lot in the Abbot Kinney area, providing a solution to the recent parking ban instituted during the monthly First Friday event. Preserving the charm of First Fridays by reaching a compromise with both the AKMA and SoCal MFVA, this new arrangement will allow the food trucks to have a substantial presence without obstructing storefronts or congesting foot and vehicle traffic on Abbot Kinney Blvd.

Where: Bigfoot Entertainment’s parking lot, located at 1611 Electric Ave., Venice, Calif., across from The Brig

Additional Information: Formerly a regular staple of First Fridays in Venice, the AKMA moved to prohibit street parking for the food truck vendors. In November, almost 50 food trucks showed up for First Friday, occupying nearly half of all the available parking spaces. Beginning in December, the AKMA implemented a parking ban, which will remain in effect through Spring 2011. While the ban alleviates the sidewalk congestion and lack of parking spaces, the absence of food trucks struck a nerve with patrons of First Fridays, some of whom called for a boycott of the events. Bigfoot is working with the AKMA and SoCal MFVA to reach a compromise that allows patrons to enjoy the food truck craze while meeting the needs of retail members of the AKMA.

Bigfoot has also partnered with food trucks in the Los Angeles neighborhood of Westwood, for “Dinner and a Movie” nights at Bigfoot’s Majestic Crest Theatre, allowing patrons to bring fare purchased from food trucks into the theater.