Birds are chirping. Flowers are blooming. Your parents are asking if they can stay with you for the Cherry Blossom Festival. It all means one thing: Food truck season is here. Here are five newcomers whose rollouts you may have missed late last year.

Dirty South Deli
dirtysouthdeli.com; @dirtysouthdeli
You’re not likely to find ingredients like ramps, popcorn mayonnaise and finger limes at most sandwich trucks. But chef Jacob Hunter taps into his gourmet background (he spent seven years as a chef at Matchbox) while crafting sandwich combos. The truck, which Hunter co-owns with Will Fung, hit D.C. streets in November. “I’m elevating what a food truck is and having fun with it,” Hunter says. “I look at it as a restaurant on wheels.”

Joe Neuman founded the Sloppy Mama’s BBQ truck with his wife, Mandy, in August. The former teacher serves North Carolina pulled pork, Central Texas brisket and smoked chicken with sides like baked beans, coleslaw and from-scratch pickles. “Most people cook their meat in an oven and throw it on a smoker for flavor,” Neuman says. “We cook everything entirely on the smoker.” The truck sells only in Virginia now, but D.C. plans are in the works. 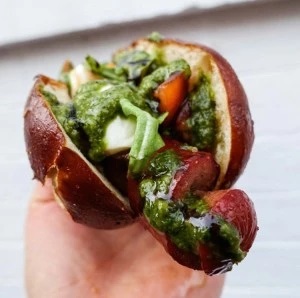 Founded by college buddies as a project for business class, Swizzler reverses the stigma that hot dogs are mystery meat. (Their venture broke the sales record set in the class.) The truck launched in October selling grass-fed beef hot dogs cut into a spiral shape. “We did the math and found that you get 3.5 times more surface area than a normal hot dog,” says co-founder Jesse Konig. Dogs are topped with handmade ingredients like pesto, chili and coleslaw. 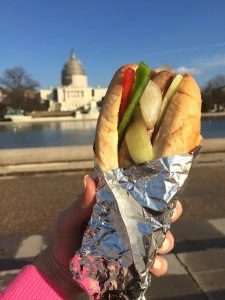 Paul Simone and Matt Kirk bartended side by side before opening this sausage truck in October. “We worked well together behind a cramped bar. We thought we’d make things even tighter in a truck,” Simone says. Sausages come from Logan’s Sausage in Alexandria and are topped with international ingredients. There’s a chorizo sandwich loaded with sour cream and sweet chili sauce, and Italian sausage with grilled onions, peppers and provolone. 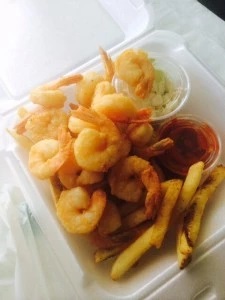 This seafood truck serves beer-battered cod and shrimp from the Maine Avenue Fish Market in Southwest D.C. The magic lies in its crunchy-yet-fluffy crust, created using flour available only in North Carolina. Sandwiches and platters are made to order by co-founders Karrin Jones and Mytia Crawley. “We have 35 combined years in the restaurant industry,” Crawley says. “Plus, I’ve been cooking ever since I could stand on a crate and help my grandma.”

Takorean, Curbside Cupcakes and other food trucks make the move to brick-and-mortar.