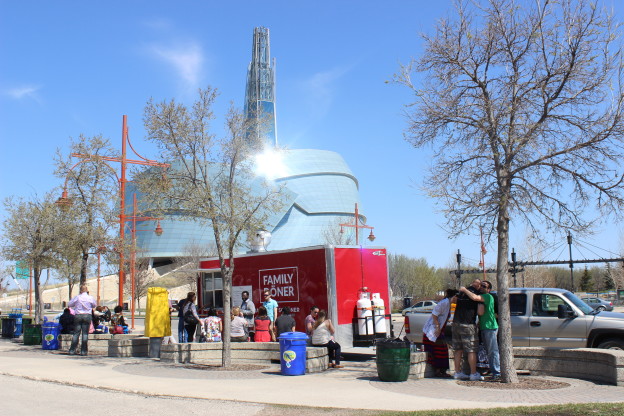 The Forks has now joined Broadway as the spot in Winnipeg for street eats.

A fleet of 10 trucks will be rotating through five primetime spots, making curbside dining the latest thing you can find at The Forks.

This comes on the heels of a recent announcement that zesty new food kiosks will soon be found within The Forks Market, a move which will hopefully make Manitoba’s most visited tourist attraction also the city’s casual culinary centre.

“We really wanted to bring The Forks up a few notches to make it a real unique food destination — and food trucks are part of that wave of interesting food options,” said Chelsea Thomson, manager, marketing and communications for The Forks.

“So as we are refreshing The Forks Market, and bringing in new tenants there, we also want to increase our options outside.”

The ten trucks that will form this include Iggy’s Family Doener, Healthy Eats, Burgers R Us, Little Bones Wings,The Poutine King, Habanero Sombrero Taqueria, The Bannock Factory, Smokin’ Haut, Fired-Up Mobile Wood Fired Pizza and Hot Rod’s, along with the added bonus of Pop Cart, whose multiple gourmet popsicles utilizing flavour combinations of fresh herbs and hand squeezed juices — which are said to be the bomb — will be making regular appearances on the Riverwalk.

A couple of us from the office brought our appetites to The Forks today, and here are the two standouts:

First and foremost was Iggy’s Family Döner which kind of rocked my world. Iggy (Igor Georgijevic) himself is from Munich and despite being at Bayern fan (PCG is Dortmund all the way! #BVB) seems like a really cool dude. His wife Candace, who is from Manitoba, brought this fellow here three years ago (they are based out of Steinbach) and as of last year they’ve been serving up German-style döner like you’d get after the bar in Deutschland.

The crispy-yet-moist chicken cut from the spit was banging, while the accoutrement of a tangy yogurt sauce and cabbage salad, all served inside a toasted flatbread pocket, is now vying with Tot Wheels’ Korean Barbecue number, the carnitas tacos from Habanero Sombrero and the pies from Red Ember and Fired-Up as my favourite meals on wheels in Winnipeg.

Also of note today was the killer El Mexicano poutine from The Poutine King.

Just look at this bad boy, nothing too fancy, but right on the money and served fast too (all the trucks had pronounced lineups today and The Poutine King is certainly the fastest). El Mexicano features heaps of taco beef, sour cream, hot sauce, diced tomatoes and green onion — what you’d imagine Tex-Mex fries to feature — but boy I tell you it is one well-executed little ditty. Their fries — not too thick, not too thin, crispy on the outside while still fluffy in the middle — are certainly worthy of their namesake crown too.

With this daily rotation of 10 trucks your tastebuds could be eating around the world, all while in a setting with ample green space for picnicking.

And, based on today’s crowds, it’s a sure bet that The Forks will prove a savoury setting for this fleet of food trucks.

*note: I cannot justify the absurd amount of alliterations in this article, it just sort of happened.