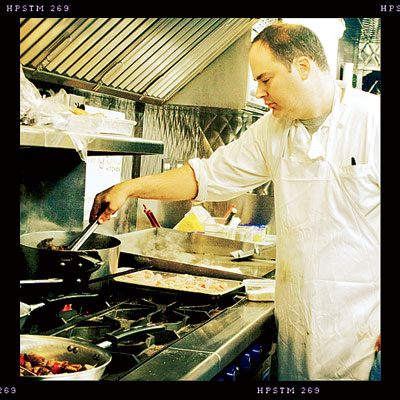 The food truck trend—tricked-out rides serving high-end street fare to hungry Twitter followers—stalled locally because of our city’s draconian ordinances prohibiting onboard cooking.  But, a fleet of four-wheeled pioneers hit the pavement anyway, steering clear of trouble by selling already prepared sandwiches and baked goods. (Food made to order can be found in Evanston, where cooking on trucks is legal.) Now that the craze is in high gear, we present a rundown of the culinary road warriors.

Hummingbird Kitchen
This custom-built 28-foot beast from the owners of Evanston’s Campagnola and Union Pizzeria is the Humvee of food trucks. Two massive propane tanks power a fully equipped restaurant kitchen (featuring two convection ovens) that cooks up fresh hot items, such as crab cake sandwiches and braised short-rib tacos ($6), but only in Evanston—for now. twitter.com/hummingbirdtogo

Flirty Cupcakes
“We sell to a lot of pregnant women,” jokes the perky girl behind the counter of Big Blue, a cutesy pink-and-blue rehabbed ice-cream van. But you don’t need a bun in the oven to crave treats from the city’s first new-era food vehicle, which rolled out last spring. Winning flavors include Mocha Me Smile and the banana-chocolate Curious George ($3.25 each; four minis for $5.25). Suburban stops get love on weekends. twitter.com/FlirtyCupcakes

More Mobile
This sleek Mercedes van takes Patty Rothman’s acclaimed Gold Coast cupcake shop, More, and places it on wheels. More than a dozen rotating flavors—including the decadent chocolate-on-chocolate Valrhona ($3.50) and savory faves like bacon-maple ($4.50)—get showcased in an elegant backlit display that mimics the shop’s interior. There’s a reason people snatched up more than 12,000 cupcakes during an opening week giveaway. twitter.com/themoremobile

The Gaztro-Wagon
“You can’t walk into Jimmy John’s and get a duck confit sandwich,” says Gaztro-Wagon’s Matt Maroni, a former chef at the Mid-America Club. But from this red-and-white rehabbed postal truck, you can get one in the form of a “naan-wich” ($7–$12) or request other fancy fillings, like braised lamb or lobster, in your freshly baked flatbread wrap. The truck roves el and Metra stops at dinnertime; stationary dining is available at Gaztro-Wagon’s Edgewater storefront. twitter.com/wherezthewagon

The Meatyballs Mobile
What this beat-up Chevy truck lacks in looks (“It’s a temporary ride,” explains the owner, Phillip Foss, recently the chef at Lockwood), it makes up for with a menu of hearty innuendo-laden meatball sandwiches on artisan Labriola baguettes. Don’t miss the sweet and spicy Thai’d Balls ($7)—turkey mounds bathed in coconut milk and chili sauce—or go balls-out with the edgy Not Yo’ Daddy’s Balls ($8), made with real bull testicles. twitter.com/FossFoodTrucks

Simple Sandwich
“My concept is: Find a really nice product, put it between two slices of bread, and don’t screw it up,” says David Wojtonik, the modest owner behind this modestly named truck. (It was a brick-and-mortar concept until the bank nixed his loan.) Truth is, Wojtonik’s flavor combinations exude simple beauty. Exhibit A: grilled chicken with zesty Spanish chorizo and piquillo pepper jam on an airy French bollo ($7). (Parked for the winter but available for catering.) twitter.com/simplechicago

Happy Bodega
Amanda Cavazos originally wanted a coffee truck (a no-no under current Chicago laws); then she took a different tack and created this friendly silver convenience store on wheels. Grab locally made granola bars, Crop to Cup coffee, baguette sandwiches, or signature Happy Pockets ($4.50–$6), warm and flaky pastries filled with everything from ratatouille to Italian sausage, fennel, and feta. Props for the West Town breakfast service and fresh flowers for sale. twitter.com/happybodega