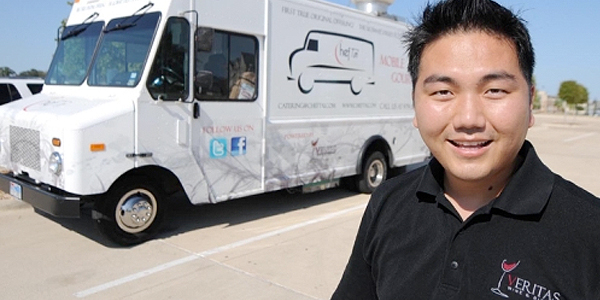 Chef Tai Lee, the recent winner of America’s Favorite Food Truck, is a Korean American who came to the States when he was 13 years old.  He moved to College Station and attended Texas A&M University and graduated with Finance Degree. Tai started his culinary career even before he graduated from college. When he was in college, he worked at a local sushi bar and eventually became an Executive Sushi Chef.

After working briefly for a corporate restaurant group to learn management side of the restaurant, Tai teamed up with, then a regular VIP and now practically his Irish Parents, Mike & Mary O’Brien to create a restaurant, Veritas Wine & Bistro, with emphasis on Seasonal & Fine Ingredients paired with great selection of wines. Veritas Wine & Bistro opened in January 2007. As an Executive Chef for the restaurant, he was able to experiment and hone his skills and appreciation for food and people he serves. His food truck is an extension of himself who appreciated all these people. Through his food truck, he is able to offer high quality hand crafted food at an affordable price compare to a traditional gourmet restaurant. Read my interview with him, after the jump!

How is it like being the winner of America’s Favorite Food Truck?

I am still numb from the shock. I really didn’t think I was able to compete against so many great food trucks out there. I have been to many of them that were competing against me and I respect their operation standards. It will be more accurate to say that our local residents are the real winner and they won it for me.

When did you decide to be a food truck owner?

As a high-end restaurateur, I always felt that I was limiting my service to the upper crust of the population. Not that I mind, I wanted a way to spread my culinary creation to more people to share the joy of making delicious food without diluting the high-end restaurant image. Luckily, my parents live in California and they were keen to the idea of food truck. It was late 2009 when my parents suggested about running a food truck to serve our local college students with our food. So, on September 2010, we opened our door to the public to serve our popular lunch items and some new creations from Veritas Wine & Bistro.

Can you give us an idea of what your food truck serves and how is it different from other food trucks?

How are being an executive chef and restaurateur at a fancy restaurant different from being a food truck chef and owner?

Well, the major difference will be the lack of proper A/C system on our truck! But seriously, only main difference is that we are on wheels and Veritas is fixed. Our Food Truck was designed also to carry out all of the Menu Items offered in Veritas Wine & Bistro as a Catering Truck. It actually has better oven than the store. Both the food truck and the restaurant are manned by the same team. We try our best to maintain the continuity of quality that we have built as the foundation of our restaurant operation 5 years ago.

Why did you choose to have your food truck in Texas instead of other locations?

Well, I was originally going to open my business in Houston or several other cities, but as a new aspiring chef and restaurateur, I figured it would be safer to open in the city where I understood the market and where I had the strongest support from local friends and alumni at Texas A&M University.

Do you ever think of expanding to other locations such as Los Angeles and New York?

I am young and inexperienced in operating multiple restaurants…this is actually my first year managing two! So, the short answer is NO. After improving my skill as a chef and operator I will think about it!

If you make it to season 3 of The Great Food Truck Race, how will you prepare yourself for it and what is your game plan?

Having the right team that can do many different tasks at once will be crucial. Having the flexibility to adjust your game plan will be another crucial factor.

Last Question: Can you cook Asian food as well or do you prefer making gourmet food?

Yes to certain degree! My wife is better at certain types of Asian Food. Food, Music, and Love are known to have no border. Asian Food is the new standard of Gourmet Food and being studied by many of the top chefs around the world. It is not too far in the future where Asian Flavor is translated as the Gourmet Food!

Congratulations again, Chef Tai! I hope I have a chance to try his cooking one day. Don’t forget to check out Chef Tai’s Mobile Gourmet!