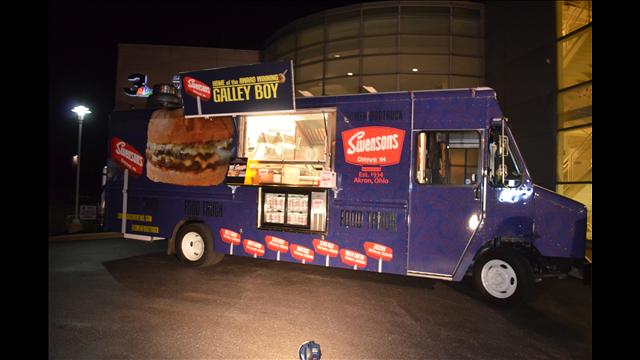 The popular Akron-area drive-ins now have eight restaurants — the latest is on four wheels.

Decades after opening the first Swensons location on South Hawkins Avenue in West Akron back in 1934, the burger haven has now unleashed its first-ever food truck.

And it has been a huge success.

Since making its debut three weeks ago, the Swensons food truck has been booked every day.

The food truck is available for any event from company meetings, to concerts to graduation parties. In fact, Swensons officials say the food truck is popular at wedding receptions.

The food truck has the same menu as all the standing locations. Its kitchen in the truck features a six-foot grill, two deep fryers and a milkshake machine.

Swensons’ signature item is the Galley Boy, which is consistently ranked locally by various organizations as the best burger around town. The Galley Boy is a double cheeseburger with two homemade special sauces — one is a tartar-style sauce, the other a smoky barbecue. It’s famously topped off with a green olive.

The Galley Boy has been featured on the Food Network and other national talk shows throughout the years because of its popularity.