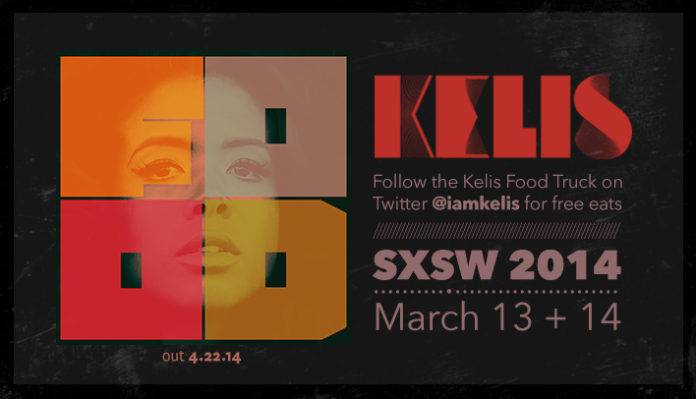 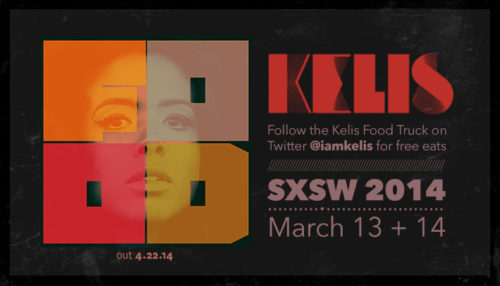 Heading out to Austin and looking for a quick, FREE bite? Singer/Songwriter and popstar, KELIS, will be serving hungry festivalgoers from her very own food truck during music week at SXSW, March 13th-14. Here’s what’s on the menu:

The experience, brought to you by Roaming Hunger, will be promoting Kelis’ forthcoming album, FOOD, and will be making stops at each of her SXSW showcases. “Food,” the new album from R&B singer Kelis, is a rich and complex banquet of sounds that might come as a surprise to those who know the singer only from her 2003 hit “Milkshake,” says in an article by Deborah Sengupta Stith of Austin360 (http://www.austin360.com/weblogs/austin-music-source/2014/mar/03/singer-kelis-serve-saucy-treats-food-truck-during-/)

Kelis is a Le Cordon Bleu certified chef whose cooking is every bit as good as her music. The FOOD truck will be appearing for several hours in multiple locations on Thursday 13th and Friday 14th March. It’s a great opportunity to meet Kelis, eat some of the best food you’ll ever taste, and contribute pictures of your own culinary delights via social media to win prizes. Best of all, you’ll hear the stunning, lip-smacking new album by this maverick musical legend.

March 13-14: Find where the Kelis food truck will be parked at SXSW by following her twitter feed @IAmKelis and @RoamingHunger

Roaming Hunger connects foodies to food trucks. Whether it’s a catering a large corporate event, a branded promotion or a trip to your local food truck lot, we provide consumers and businesses with access to the best food trucks and innovative dishes in the country.

With food trucks and food carts approaching a $2.7B industry, Roaming Hunger’s website and app draw in more than 5M truck views per year, $100M in gross catering requests and showcasing over 4,000 food trucks and carts throughout North America.