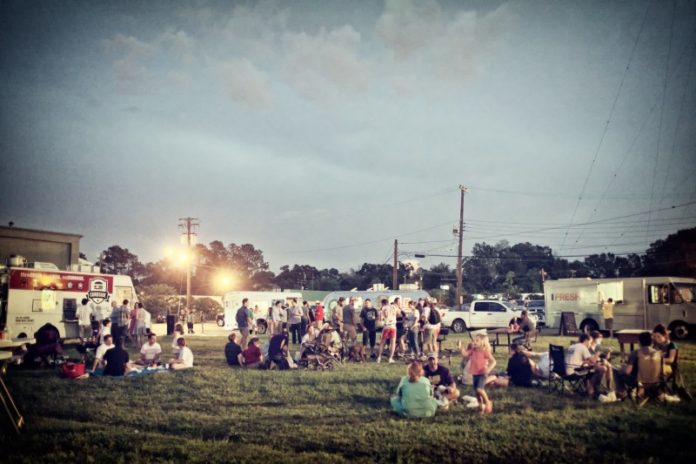 In all the recent dustup over food trucks in Baton Rouge, it might be easy to forget what a great sense of community they are able to generate. A local councilman (and brick and mortar restaurant owner who has been a general obstacle to progress over the years) tried to pass a series a ordinances that would have made it more difficult, if not impossible, for food truck operators to sell their fare.

Thankfully, his efforts were seen for the transparent self-interested ploy to regulate competition out of existence that they were, but it still goes to show that a certain sort of politician loves to talk about doing away with the burden of regulation until that regulation helps him win one over on his competition. The best, last-ditch effort to defend the ordinance was that food trucks didn’t have the expense associated with a brick and mortar so… no real argument was offered beyond that, just so they should be controlled before they got out of hand and did something productive, like giving people what they want. This is a bit like a buggy whip maker complaining about cars because they went faster than horses and therefore should be made illegal.

At any rate, many of the local food truck operators were instrumental in raising the awareness among the public about the upcoming legislation and successfully had it removed from the council agenda. I suspect that this is not the last we have heard from the unmentioned councilman, but it was a heart-warming victory all the same. Some of the food trucks have been regularly gathering at various locations around town to allow the increasingly culinary-aware citizens of our little burg to taste the variety of foodstuffs for sale at the different trucks. They call these get-togethers “round-up” and one such event was held last week, a day prior to the council vote, outside of the local brewery, Tin Roof.

It was the first round-up I had attended but the cross-section of folks who were there as well as the general feeling of bonhomie among the business owners who conventional wisdom would indicate are all in completion with one another was encouraging in the extreme. Just as food trucks seem to be changing the way we think about eating from (sadly) out of a sack in the car, in a sit-down restaurant or at some location within a person’s home, they also seem to be changing the way we think about business. People who share a common business model can often be found banding together to try to multiply their voice and power, but this seemed to be something more. Of course, all the food trucks are in some form of competition or another but it is an encouraging sign when businesses who’s core market share overlaps see an opportunity for cooperation rather than one for pure, market-driven competition.

Baton Rouge, if you love or even mildly appreciate the convenience and diversity offered by our nascent food truck scene, I encourage you to remain vigilant in their defense. Hopefully these pictures will do a little to dispel any lingering doubts people might have about the popularity, threat or outmoded view of food trucks as steaming, solitary purveyors of egg-salad sandwiches and sodas idling in front of a factory come lunch whistle tooting time.

It is sad but obviously evident fact that if we want to continue to enjoy the bnoon brought by developments in new eating and cooking styles that we will have to occasionally fend off the parochial interests of the small-minded but politically powerful. Perhaps the message might be made a little more clearly if we all eschewed dining at the still unmentioned councilman’s establishment and instead went for a porchetta sandwich, a tasty salad or some gelato at these mobile eateries.