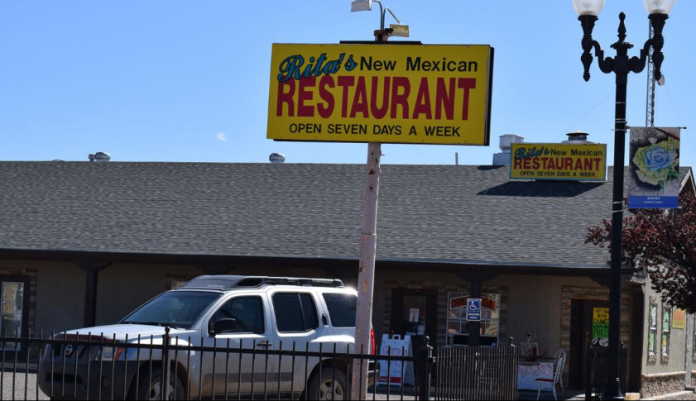 BELEN—As the COVID-19 pandemic continues to wreak havoc on people’s health and to the economy, a couple of Belen restaurant owners are feeling the pinch thanks to mobile food vendors.

Since mid July, several food vendors have been participating in Food Truck Friday at Anna Becker Park in Belen. Some are local and some are not.

For Jennifer Davis, owner of Rita’s New Mexican Restaurant, and Janet Montano, owner of La Dos Gringas, both in Belen, the weekly Friday event has been negatively affecting their businesses.

For Davis, she’s looking at drastic measures because the event is taking away valuable business.

“What’s happening is I’m going to have to close my doors on Fridays,” Davis said. “I was able to make it throughout the whole pandemic without letting anyone go, but I’m at the point where I don’t know what to do.”

“We’re just a little (restaurant) trying to make it,” she said. “We’re struggling so much. It’s been affecting us for weeks since they started.”

Montano says the Food Truck Friday, which as been popular since it began, has also made it hard on her restaurant, but she’s determined to continue to offer the same quality food and service to her customers.

“It has slowed us down a lot,” Montano said of her Friday customers. “Fridays used to be my busiest day of the week, an now it’s like any other day of the week. We probably have 50 percent less business on Fridays.”

Montano, who opened the restaurant with her daughter, Desiree, two years ago, is disappointed in the city for not informing local business owners of the weekly event, and not inviting them to participate.

“I was never notified they were allowing food vendors to go into the park, and was never told by the city this was taking place,” Montano said. “We, as local business owners, are struggling for local business, and now that the food trucks are there every Friday, the local businesses are suffering.”

The Food Truck Friday is a city-sponsored event, which is held from 11 a.m. to 6 p.m. every Friday, and coincides with the Farmers Market at Anna Becker Park.

Both Davis and Montano said the restaurant industry has been hit hard with the governor’s restrictions, and are just trying to keep afloat and pay their employees.

Davis has owned the restaurant for a year and a half, and said she has followed all the rules since the pandemic began, closing to indoor dining when told to do so, offering an outdoor eating space when allowed and even set up a window for carry out.

“We’ve struggled a lot,” Davis said, “but we’ve pulled ourselves up and went to work. We’re doing our part but we really need some backup.”

When school started several weeks ago, Davis said she was determined to help her loyal employees in anyway she could. She set up spaces in three different rooms in the restaurant where her employees’ children can study or attend school virtually.

When the pandemic first arrived and restriction were placed on restaurants, Montano was forced to lay off 16 of her 18 employees. When they were allowed to reopen, she brought back all employees but a week and a half later, she had to lay them all off again when restrictions were put in place again.

“I’ve had to shorten our hours until (the governor) opens us back up, and I’ve lost three employees,” Montano said. “I understand that they needed to work; they have financial responsibilities.”

In the meantime, Montano says she continues to practice COVID-19 safe practices and is doing all she can to maintain what she’s been able to accomplish in the past two years.

“But when we’re trying to keep our business going, the food trucks hurt our businesses,” she said. “I’m worried about my business. My rent will go up soon and we haven’t raised our prices.

“At first, I got really upset; I think the timing of the food trucks is bad. If we weren’t shut down at 25 percent, maybe things would be better.”

“I wouldn’t call them competition,” Montano said of the food trucks. “You can’t compare my food to that of what’s served at a food truck. You can’t get chicken fried steak at a food truck. They’re just taking that (revenue) from local businesses.”

Belen Mayor Jerah Cordova said Food Truck Friday, which is run through the city’s Community Center, is set to end at the end of October, when the Farmers Market concludes. He did say the city is in discussion of what might happen in November with the trucks.

“It’s a very careful balance ensuring our local restaurants are supported while bringing in new business to Belen,” Cordova said. “While we are certainly going to support the local restaurants, we are going to continue with business development in the city. We have heard that some food trucks are looking to expand, which is good for the business community as a whole.”

While neither restaurant owners is criticizing those who are trying to make a living, they are concerned that the city might not be receiving gross receipts taxes from the food trucks because many are not locally-owned.

“I understand food trucks is the new thing; they pop up everywhere,” Montano said. “But at this time, it needs to stay local. I’m paying a higher dollar for my place, which is nice and offers good food.”

Although it’s tough to stay in business, Montano said it’s her loyal employees and customers who give her hope for the future.

“Our customers have been great,” she said. “I had one lady come in and give me $500 because she wanted to make sure we stayed open. Last night, the last table of the night gave my waitress a $50 tip. It’s the little things like that that helps me keep going.

“The community has to stick together and get through it,” she said. “Letting outside people come in is not right for this community. We’ll just have to sit back and be patient, and know we’ve done everything we can.”

Davis said she has spoken to several restaurant owners in Belen and said they’ve told her they too have also been seeing a slowdown in businesses every Friday.

“People here should only be supporting Belen restaurants,” Davis said. “One of the owners said it was a royal kick in the teeth. I’m thinking of going to the park and holding up a sign saying, ‘Free Food at Rita’s.’ I would have to take money out of my savings to do that, but at least my girls would be making some tips. I’ll be fine no matter what, but for some people, they’re suffering.”

Cordova said since he became mayor, he’s had a lot of requests to bring in new restaurants.

“And Food Truck Friday offers that,” he said. “They have a lot of variety.”

The mayor said he personally hasn’t partaken in the food at Food Truck Friday, but understands the attraction to the weekly venue, saying people are becoming more comfortable getting out.

“The goal is to always shop local and spend at local restaurants,” the mayor said. “That’s how our city and our budget succeeds. It’s always important to support new businesses coming to town, and if we can bring in new restaurant opportunities to town, I’m always in support of that.

“I can understand (restaurant owners’) concerns and it’s a challenge for all of the businesses,” he added. “There’s no doubt about it. As we continue to operate under COVID restrictions, we’re going to have to stand up as a city to support local businesses.”