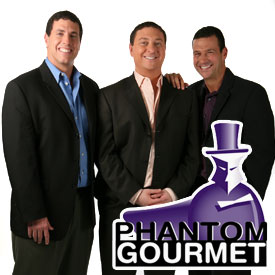 Over the past few weeks, Staff Meal and Phantom Gourmet have been duking it out over food trucks and brick and mortar restaurants, and whether or not they should be able to reside alongside one another. The debate originated when the owner of Al’s State Street Cafe, a Phantom Gourmet sponsor, went on their radio show to discuss how food trucks are hurting his business. Not wanting to lose ad dollars from sponsors like Al’s, Phantom Gourmet made very clear they take an anti-food truck stance. As head of the Restaurant and Business Alliance (RABA), Phantom Gourmet’s CEO Dave Andelman also penned an op-ed last weekexplaining how brick and mortars seemingly have it harder than food trucks in terms of financial operations and outlining guidelines to keep food trucks very far away from them.

Just how many ad dollars does Phantom Gourmet have resting on brick and mortar restaurants? Apparently, a lot. Local food critic MC Slim Jb delved into the relationship between RABA and Phantom Gourmet, noticing pointing out how close of bedfellows they are. On his Facebok page, MC Slim Jb writes:

A casual inspection of the member list of the Restaurant and Business Alliance — the lobbying group that Dave Andelman heads and is using to promote tighter food truck regulation — suggests that about 75% of them are businesses that the Phantom Gourmet TV show has run ads for, plugged on the show (without any disclosure of a pre-existing business relationship), or both.

Essentially, Andelman is operating under an “alliance” to make it seem like his argument that food trucks hurt other businesses is legitimate. Instead, the “alliance” is just a fancy term for Phantom Gourmet sponsors, who fear that Bostonians will realize their $10 sandwich is overpriced and tastes disgusting, and opt for a better food truck option instead.

MC Slim Jb sums it up nicely: “I knew the Andelmans had a pretty sweet, corrupt racket going on, but I had underestimated its sophistication. Impressive.”