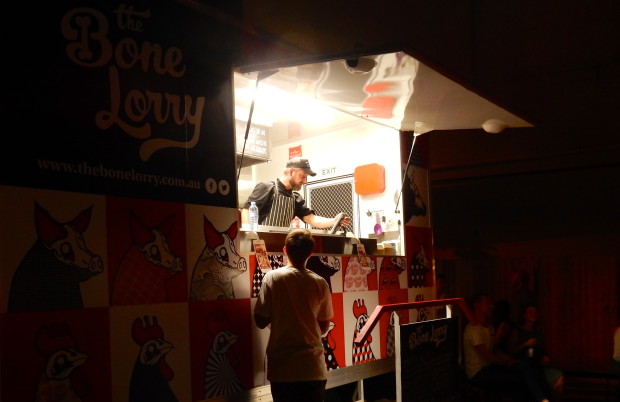 By Contributor  |  The Tech Street Journal 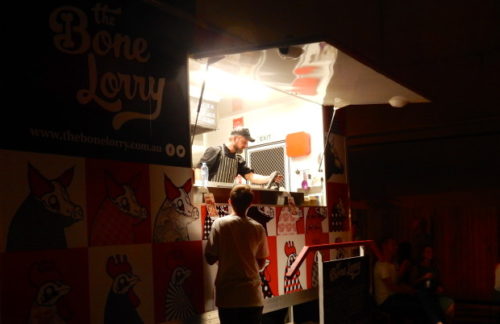 The app, which allows users to order and pay for food from their smartphones and was pitched at last month’s Germinate event, created a more convenient dining experience for the night’s customers but meant vendors had to adapt their serving habits.

Describing the party as “enjoyable mayhem,” co-founder Chris Illuk saw StreetEats help feed hundreds of guests and, when usage became too intense, have to be temporarily disabled by The Bone Lorry.

“We were really stoked on the turnout, and it really put the app through it’s paces because these guys were getting absolutely pelted with orders,” Illuk said. “We’ve got functionality for vendors to control the flow of order by turning mobile ordering off, as well as rejecting orders when they’re really overwhelmed.”

“But I think it’s incumbent on us to help even more to control that flow, to give users an idea of how busy it is before they order as well as make it even easier for the vendors to do little things to help them control the flow of orders,” he said.

Illuk believed an app is unnatural to how a kitchen usually functions. While vendors traditionally serve customers one-by-one, creating a bottleneck StreetEats is designed to remove, this tradition has the benefit of controlling the pace of orders.

“But at the same time, nights like this are not every night, and still this helps the vendors,” Illuk said. “In a situation like this where you don’t have all vendors running [the app], the vendors who were running it would be the vendors who win because they can collect more orders.”

StreetEats will continue working with the night’s “incredibly patient” food trucks as the team works on perfecting the app. They had ordered but not received official hardware prior to the night, and the vendors were operating with trial hardware.

For their part, the vendors enjoyed the novelty of implementing one of Australia’s first food truck apps (following tracking platforms like wherethetruck.at), as well as hundreds of paying customers.

Only The Bone Lorry had to cancel orders, and vendors like Just Steak It’s Lior Erlich appreciated both the influx of customers and the app itself.

“[StreetEats] is awesome, I don’t have any complaints,” Erlich said. “Obviously we’ve been working with a hand-written ticketing system, so still we need to get used to it, but the app was working.”

“We were understaffed, that was our problem,” he said. “People waited a bit longer than they should have but the food goes out.”

As to the future, StreetEats is focused on a location-based rollout, and are targeting venues such as Eat Street Markets, Downy Park Food Truck meetups, Logan’s Eats and Beats Festival, the Gold Coast’s Night Quarter, and festivals such as Night Noodle Markets and the Brisbane Festival.

“Basically all of those events that have a food component, where StreetEats comes into its own,” Illuk said. “Where it’s either an event like this, where people get utility out of street food from the fact that it’s really busy, or even daytime food events, where it lets parents sit down with kids.”

“StreetEats is not just for hipsters,” he smiled. “Hipsters like new shit, but they’re terrible long-term customers because next week there will be more new shit.”