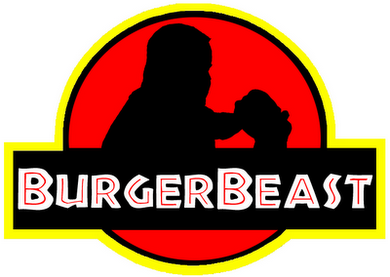 In the email, Logue stated Burger Beast’s Miami Food Truck logo was similar to the Miami-Dade “sled” trademark (again, why Miami has a sled for a logo we’ll never understand), and that “Miami-Dade County created and owns this mark. It has registered this mark with the Florida Department of State. It has continually used it for decades. For these reason, Miami-Dade County has an intellectual property right in this Mark”.

The email further stated that Burger Beast had seven days to stop using his logo and respond to the county’s email. Beast told Short Order that he intended to stop using the logo to avoid a long and potentially costly legal battle with the county.

Late yesterday, we received a copy of the reply to the county drafted by Burger Beast’s attorney, Luis Andre Gazitua. He explains (rather humorously) that Burger Beast is “a Miami Food Blogger who writes about his food experiences. He is not a chef. He does not sell food — he eats it.”

Gazitua then gets down to legaleze and states that Burger Beast’s Miami Food Truck logo was a parody, which is a defense to trademark infringement. He then proceeds to cite several cases in which companies have lost trademark infringement lawsuits as a result of a “parody” defense. He also brings up the “Wade County” logo, which is also a parody of the Miami-Dade logo that Miami-Dade seems to be OK with.

Garzitua then confirms that Burger Beast will no longer use the logo on his website (though the logo was still on the site when this blog was written).

Read the entire letter here. Hopefully this solves this issue that should have been a non-issue to begin with.

I am responding on behalf of Mr. Sef Gonzalez, hereinafter known as “the Burger Beast”.

The Burger Beast is a Miami Food Blogger who writes about his food experiences. He is not a chef. He does not sell food – he eats it.  His blog was originally created to find the Best Burger in Miami but has since gone on to become the preeminent go-to spot for foodies in search of information on the Miami Food Truck Scene.

The Burger Beast has become a leading community advocate for the Food Truck phenomenon in Greater Miami. As a matter of fact, he spoke before the Board of County Commissioners last week on how the Food Truck movement has provided an affordable and fun solution for families looking for dining alternatives during these economically challenging times. You may recall that both Commissioners Lynda Bell and Barbara Jordan were in complete support of the Food Trucks in general from the outset of the public hearing. Finally, you may have also caught the Burger Beast at Street Food Fridays at the Arsht Center – he is the main promoter of the recurring event.

As an advocate for the Food Truck phenomenon (which are predominantly locally owned and family run), the Burger Beast commissioned a logo to help increase awareness of this burgeoning scene. The logo is an obvious parody of the Miami Dade County Government logo.

Parody is a defense to trademark infringement. A parody is defined as a “simple form of entertainment conveyed by juxtaposing the irreverent representation of the trademark with the idealized image created by the mark’s owner.” L.L. Bean, Inc. v. Drake Publishers, Inc., 811 F.2d 26, 34 (1st Cir. 1987). The parody must “convey two simultaneous – and contradictory – messages: that it is the original, but also that it is not the original and is instead a parody.” Cliffs Notes, Inc. v. Bantam Doubleday Dell Publ. Group, Inc., 886 F.2d 490, 494 (2d Cir. 1989). While a parody necessarily must engender some initial confusion, an effective parody will diminish the risk of consumer confusion “by conveying [only] just enough of the original design to allow the consumer to appreciate the point of parody.” Jordache Enterprises, Inc. v. Hogg Wylde, Ltd., 828 F.2d 1482, 1486 (10th Cir. 1987).

Clearly, with regard to the Food Trucks logo, there can be no likelihood of confusion with this parody because it was never intended to and will not be taken seriously.  The Miami Dade County logo represents a government that encompasses more than 2,000 square miles (larger than the states of Rhode Island and Delaware) with a 7 billion dollar budget and population of almost 2.4 million citizens. The Food Truck logo represents gourmet burgers, minuta sandwiches, tacos, and dim sum.

The Food Truck logo may initially bring to mind the County logo, but this superficial resemblance is nothing more than a tongue-in cheek way for citizens of Miami Dade County to take pride in our County’s unique local flavor (no pun intended). It is clever enough to be clear that it is not the original nor is it connected with the original, but is instead a humorous take-off on the original.  It’s a spoof.

Now, I realize that you did not originate the request for the cease and desist.  You are just following orders.  You have far more pressing and important matters to deal with than this inconvenience brought on by staff.  However, I can’t help but point out how silly it is to order the Burger Beast to cease and desist further use of a logo meant to be a fun, positive and charming parody of that used by the County.  I’m quite certain that staff would not request that Mr. Micky Arison somehow cease and desist the use of the “Wade County” logo on T-Shirts being sold by vendors globally.  Try typing in Wade County T-Shirt in Google.  I did – and I received about 2,810,000 results in 0.17 seconds.

With all that said, the Burger Beast is confident that he would prevail on the merits but does not want to turn a good natured attempt to foster civic pride and promote local businesses into a fight with the County over a logo.

Therefore, without any acknowledgment of liability, the Burger Beast is hereby ceasing use of the Food Truck Logo and T-Shirt sales.