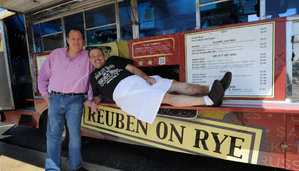 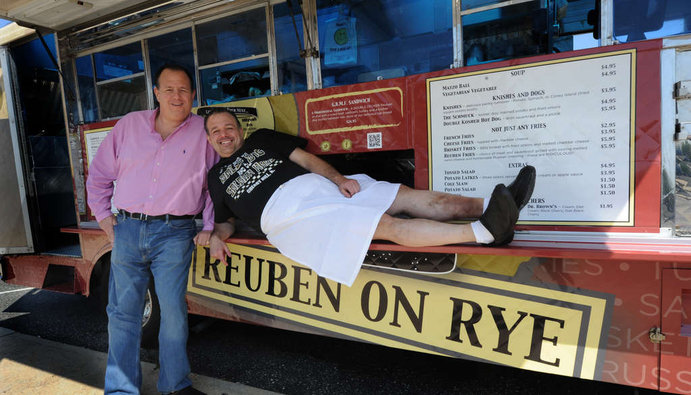 A trio of food trucks will be pulling up to the Camden waterfront every Friday at lunch beginning May 10 and continuing throughout the summer.

Organized by the Cooper’s Ferry Partnership waterfront development corporation, “Food Truck Friday,” as it’s being called, is drawing interest from a variety of gourmet trucks around the region, including the three that will start next week: deli-on-wheels Reuben on Rye, Cupcakes 2 GoGo, and Lil’ Trent’s Treats dessert truck.

The organizers hope the number and variety will grow once these trucks test the logistics and response.

“It’s a good business decision,” says Haddonfield-based Ginny Moles, who notes the difficulty in finding crowds elsewhere in South Jersey, especially in summer. The major difference in Camden, she says, are the throngs of families and field trips visiting the Adventure Aquarium, and the thousands of neighborhood office, law, and medical workers who have few options for food. “I think it’ll be a great opportunity.”

“A nice spot like this would be awesome,” says Bieber, who considered signing up his own Sunflower Truck Stop for the summer. “You get a few [trucks] and it becomes like a party.”

That’s exactly the feel Cooper’s Ferry is trying to cultivate. By adding food trucks near Fountain Park, already equipped with colorful chairs, tables, and umbrellas, it aims to develop a parklike atmosphere on the riverfront block that’s primarily used as a walk-through by visitors.

The downtown/waterfront area already hosts sidewalk carts that sell the usual hot dogs and pretzels. But because Camden doesn’t ordinarily allow food trucks on public property, Cooper’s Ferry is securing a waiver to designate truck parking in a specific lot behind the aquarium. The organization hopes Food Truck Friday will persuade city council members to expand permissions to other parts of the city.

“A quality food truck is a quality amenity for a visitor or a resident of the city,” says Jake Gordon, Cooper’s Ferry’s vice president, who envisions trucks parked next to Rutgers-Camden and the county courthouse.

In mid-April, one food truck, Reuben on Rye, did launch in Camden by parking, with permission, in a law firm parking lot, across the street from City Hall. The operators say their strong opening-week sales persuaded them to start serving breakfast as well as lunch.

“Although we have just been open for a short time, the people of Camden are responding,”says David Serata, who partnered with the owner of Cherry Hill’s Kibitz Room to launch the first of what they hope will become a fleet of Reuben on Ryes.

Their truck serves a scaled-back Kibitz Room menu from the offices of Zucker Steinberg Sonstein & Wixted, at 415 Federal St., every weekday except Friday, when they’re on the waterfront.

There have been complaints that city and county annual permitting fees (about $600) far exceed all others in South Jersey, including Cherry Hill ($200 annually) and Haddonfield ($350) without allowing them to leave the designated “food pod.” And Pennsylvania operators face some sticker shock over the New Jersey law that requires food trucks to be equipped with fire suppressant systems, which Bieber says run about $900 to install and take up valuable space that could be used for extra rolls and additional supplies.

Despite the inconveniences and costs, vendors like Jess Iannuzzi and Steve Koste of Bucks County’s Sum Pig Food Truck say they can’t wait to get their permits.

Koste believes a successful Food Truck Friday could enhance the waterfronts of Camden and Philadelphia.

“Anything that can bring more money into Camden and change its perception by boosting fun and boosting the [RiverLink] ferry would be pretty cool,” he says.