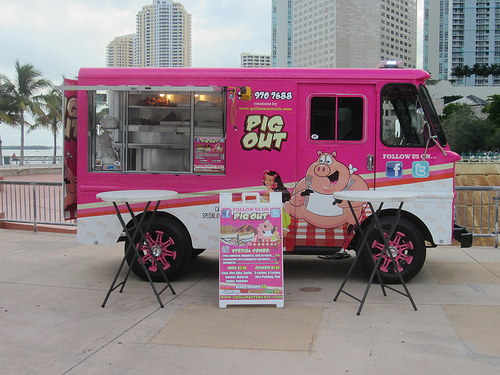 Chicago is changing the rules when it comes to food trucks. It seems that the new mayor, Rahm Emanuel, likes to get his lunch fresh from a mobile source, or at least believes that his fellow citizens should be able to do so. The Windy City has long had a ban on cooking food in trucks, but is now prepared to approve a change in that policy. Mobile food vendors will soon be allowed to cook food inside their vehicles, tempting passersby with the smell of Chicago-style hot dogs and onions on the grill.

There will, of course, be the inevitable restrictions on exactly how, when, and where these vendors can operate, and one of the most controversial of those restrictions concerns GPS monitoring. According to the current version of the new policy, food trucks are going to be required to keep their distance from restaurants—a distance of 200 feet, to be exact. The way the city plans to enforce that restriction is by having each truck install a GPS trackerthat will report its location and verify that it’s not within smelling distance of a competing dining establishment.

There are other stipulations as well; city officials might institute certain hours during which trucks can’t cook food, and there is some question whether they will be allowed to park on vacant lots to do business. But the “restraining order”-type distance restriction, enforced with GPS monitoring, is the one getting the most scrutiny. Some folks are concerned that the 20-foot margin of error that the planned units have will get some vendors in trouble even though they are actually parked far enough away from the nearest restaurant.

The restrictions attached to the policy change are fairly strict, and the mandatory use of GPS trackers strongly suggests that law enforcement plans to be serious about making sure food trucks don’t stray into off-limits areas. But if that is the case, shouldn’t the GPS units used be more reliable? After all, we now have the ability to pinpoint a tracker within three feet, recently reduced from ten. Of course, those more accurate trackers cost quite a bit more—a serious consideration for a mobile food vendor that has just won the right to cook on board his truck.