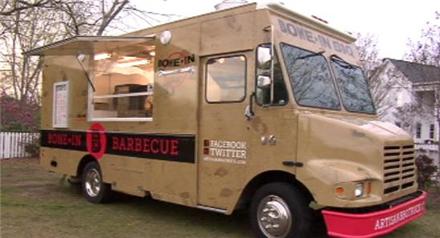 COLUMBIA (WACH) – It’s the latest food trend sweeping the nation and it’s picking up momentum right here in the Midlands, as many chefs and cooks forgo opening up expensive restaurants in favor of a more mobile way to serve food.

Scott Hall remembers the first time he heard of a food truck.

Currently a big hit on the west coast, the Columbia chef quickly warmed up to the idea.

“When I started to see these amazing trucks that had all these crazy graphic designs and like interesting food, I got really excited about it,” said Hall.

Hall was so excited, that he now owns a food truck of his own.

From inside the truck, Hall creates unique barbeque dishes with a gourmet flare.

“We’re taking traditional southern preparations of barbeque and kind of tweaking it and bringing new things to it,” said Hall.

Hall says what excites him the most is how people can find where he and his truck will be located.

And while Hall continues his unique business, he hopes Columbia will embrace the idea.

“I think that’s kind of what I would like to bring to Columbia, people who have not really been a part of, or seen this movement, to give them a chance to see it in a way that really relates to the South,” said Hall.