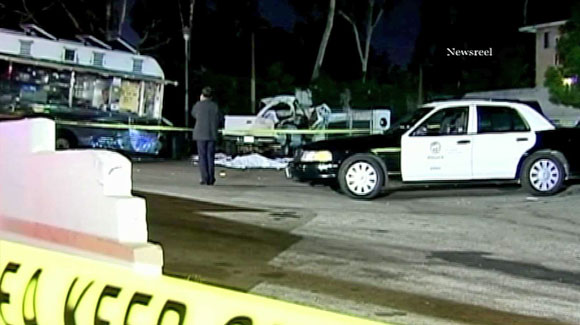 BOYLE HEIGHTS (KTLA) — A suspected drunk driver leading police on a pursuit caused a deadly crash when her car collided into a taco truck.

California Highway Patrol noticed a grey Toyota Camry speeding and weaving in and out of lanes on the northbound 5 Freeway near Fourth Street around 11 p.m. Saturday.

The female driver ignored officers’ attempts to pull her over and exited at Cesar Chavez Avenue.

Just after exiting the freeway, she ran through a red light and into a parking lot, crashing into a crowded taco truck.

Two people standing outside the truck were hit and later pronounced dead.

“[The driver] came off the freeway and hit my daughter and tore her apart,” her emotional mother said.

The other victim, who has also not been identified, is a 38-year-old woman.

Two people inside the taco truck were taken to a hospital for injuries.

The female driver also suffered minor injuries and was taken to a hospital.

She was arrested on charges on suspicion of drunken driving.