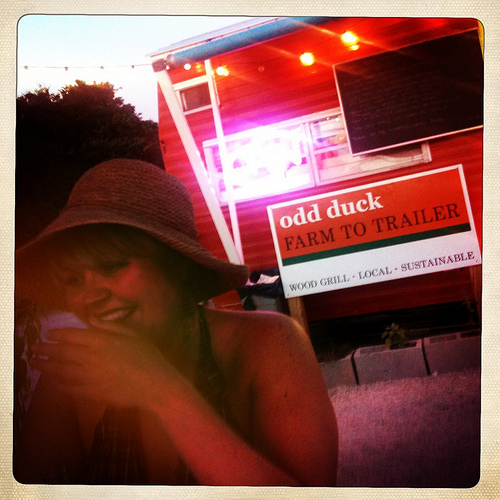 Farm To Trailer: A Documentary from Christian Remde on Vimeo.

Over the holiday weekend, Austin-based filmmaker Christian Remde debuted a new documentary on Vimeo. The piece is titled Farm To Trailer, and it focuses on the origin story of The Odd Duck food trailer on South Lamar, the locally-sourced newcomer that shot to fame after an appearance on Anthony Bourdain’s No Reservations. Chef Bryce Gilmore of The Odd Duck has now relocated down the road to the brick-and-mortar Barley Swine, where he recently won a coveted slot on Food & Wine’s “Best New Chefs of 2011” list.

When asked about the film’s genesis, Remde said: “I moved down to Austin about a year ago from New York City and really fell in love with the Austin food truck scene. I read about Odd Duck, tried it out and was really amazed by the quality of food coming out of a trailer and that everything was sourced locally. I knew a little bit about the Farm To Table movement and thought that merging the two things together would be a cool idea for a short documentary.” Remde is planning another short film on the charcuterie movement in Austin (and across the country) for later this year as part of his Twelve Films project. You can see Farm To Trailer – right now, and for free – at the link below.