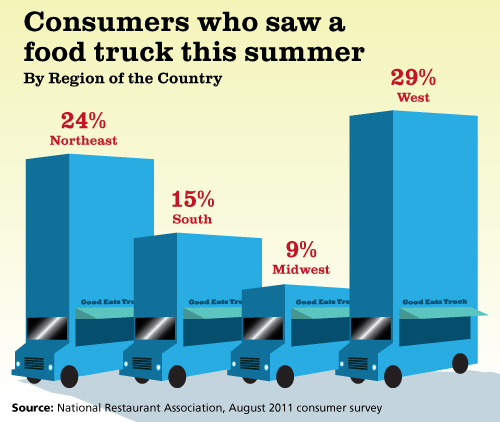 Food trucks are one of the hottest trends in the restaurant industry right now, and consumers are showing increasing interest in mobile foodservice, new research by the National Restaurant Association confirms.

The new research, a consumer survey conducted last month, found that nearly six out of ten (59 percent) American adults say they would be likely to visit a food truck if their favorite restaurant offered one, up from 47 percent just one year ago.

“Our research shows that in just one year, the number of consumers who say they would be likely to visit a food truck has increased significantly. We also found that food trucks have a more noticeable presence in communities in the West and Northeast than in other parts of the United States,” said Hudson Riehle, senior vice president of the Research and Knowledge Group for the National Restaurant Association.

“Though food trucks are often equated with chefs and entrepreneurs, they also present opportunities for operators of established restaurants to expand their operations and presence, as a majority of consumers say they would visit a food truck run by their favorite restaurant. Mobile foodservice can be a good way to extend an existing restaurant brand beyond the four walls of the establishment,” Riehle said.