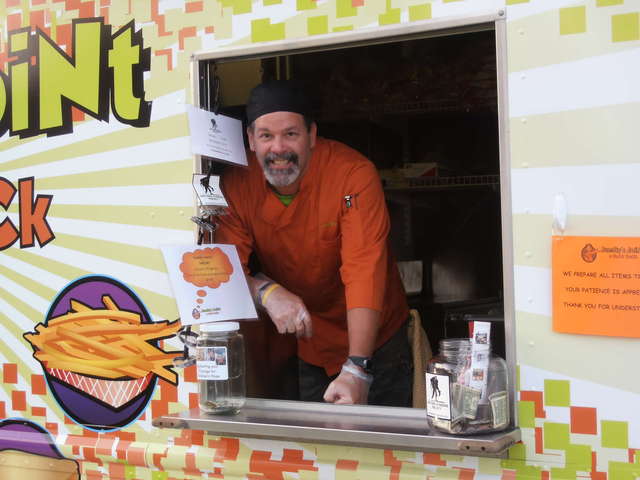 According to the Jumby’s Joint Facebook page , they handed out 1000 hotdogs, chips and bottled water to those who are in need on Wednesday.

Also according to their Facebook page, Jumby’s handed out 1000 free hotdogs on Monday and again on Tuesday at Shoaff Park to those affected by the storms on Friday.

The owner of Jumby’s Joint, Jim ‘ JumBy’ Garigen, said that the business made a lot of money selling food at BuskerFest over the weekend and the proceeds from that are funding the free food Jumby’s is giving.

Garigen was assisted by his partner Michelle DuCharme at the Red Cross Shelter.

Jumby’s Joint will be returning to business as usual on Thursday. They told WANE that they were “grateful for the opportunity to serve.”

Jumby’s Joint is a new business in Fort Wayne. The food truck began operations in Fort Wayne earlier in 2012 and will have a Ribbon Cutting Ceremony at One Summit Square on Thursday, July 5.

Garigen also told WANE, via Facebook, “I would really like to stress that we would have done this in a brown wrapped truck if possible because the focus should be on those that were and are still in need and not us. I believe if you can, you should.”