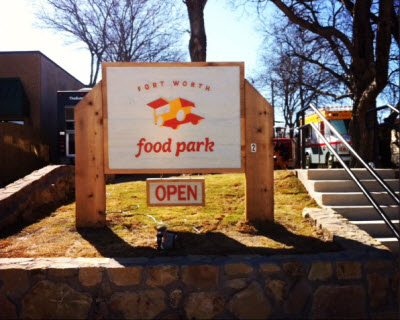 Fort Worth is following cities like New York and Los Angeles with a trendy new way to grab a bite to eat.

Fort Worth Food Park opened Dec. 2 and is located directly behind Montgomery Plaza. Park owner Chris Kruger said the idea to create the first park for food trucks came from another area where food trucks were popular — Austin.

However, Kruger said he wanted to do something different and take his idea to the next level.

“They didn’t really have something that was organized and nice with tables and benches and restrooms, so I wanted to do something like that,” Kruger said.

He said there were more than 12 trucks that rotated through the park and all trucks were from the Dallas-Fort Worth area. Since there was not just one type of food at the park, customers could count on a new food choice each day, Kruger said.

“You can find a variety of everything,” he said. “We’ve got everything from Korean BBQ, to vegetarian food, to kind of upscale bistro style, I feel like we’ve got it all here.”

Each of the trucks has its own character and story, Eliud Castro, owner of Dough Boy’s Pizza Truck, said. He added that the trucks were not originally built to cater, but owners had rebuilt them in order to provide food.

“My truck was a tool truck and the rest of these are retrofitted trucks that used to deliver something,” Castro said. “These here, they all have their own personality.”

Only four miles from TCU’s campus, the park has drawn students to visit the park and to try the food.

Junior nursing major Kathryn Aubuchon and junior movement science major Olivia Ulett said they had never been to the food park prior to hearing about it from other friends. Aubuchon said one of her friends followed one of the trucks on Twitter and she decided to give it a try.

Though the park has only been open for about three months, Kruger said the focus was to continue what they were doing and to gain more success.

“We’ve got a great thing we’re building here and it’s really our focus,” Kruger said. “So we’re just trying to get some great trucks in the park.”

The park is open Thursday through Sunday for lunch and dinner and is located at 2509 Weisenberger St.