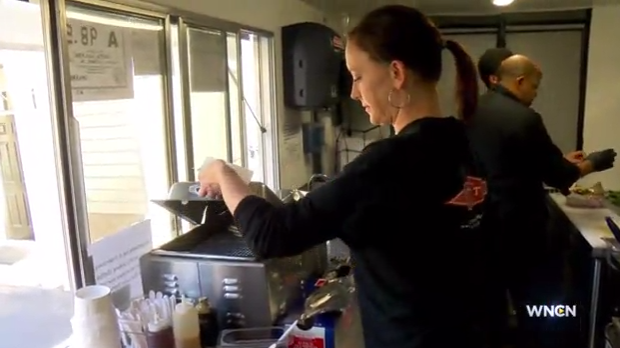 FUQUAY-VARINA, N.C. (WNCN) — As food trucks grow in popularity in the Triangle, some towns are considering creating restrictions for them.

Fuquay-Varina has recently proposed to ban food trucks in commercial areas after some local businesses complained that they’re hurting business. However, the town may now be easing up on that proposal after food truck advocates spoke out against it.

Tony Hudson, the owner of the Flattz food truck, spends most of his time setup in Fuquay-Varina and was one of the individuals who spoke out against the proposed ban at a recent public hearing.

“If they were to ban food trucks in Fuquay, it would have a major impact on my business,” said Hudson. “Food trucks bring a variety of types of menus to local clientele. There are places we go, such as office parks and business parks, where there isn’t a restaurant nearby so we’re helping serve the community.”

The proposed ban came just six months after the town approved food trucks in Fuquay-Varina. The town drafted the proposal after some brick and mortar restaurants expressed some concerns.

“The concern is that if I’m a business owner, I’m counting on a rush of customers on Friday night. If there’s a food truck nearby, maybe they’re taking some of my business,” said Ed Ridpath, the Chairman of the Fuquay-Varina Planning Board.
While some restaurants are against food trucks, many businesses in Fuquay-Varina say they welcome food trucks because they draw people to downtown and enhance the local restaurant scene.

At the same public hearing, Ridpath says there were over a dozen individuals who spoke against the proposed ban, some of them included restaurants, businesses and microbreweries who often ask food truck vendors to setup at their establishments.

“There was a large quantity of people in favor of food trucks and they were saying it’s something that adds to the town’s liveliness,” said Ridpath. “It can also serve as a supplement. For example, if you have a microbrewery that doesn’t actually serve food it helps to have people come there, get their food and then they can sit down and try the beers.”

Town officials say the massive support for food trucks has them straying away from an outright ban in commercial areas. Town staff will bring changes back to the planning board on February 15th.

“I think it was important that we step back a little bit and take some time, look at some other options,” said Ridpath.

It has food truck owners, like Tony Hudson, hopeful the town can find some middle ground.

“I understand where these brick and mortar restaurants are coming from, but at the same time, don’t be afraid of the competition,” said Hudson.