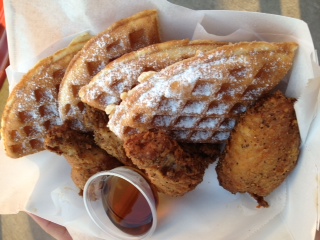 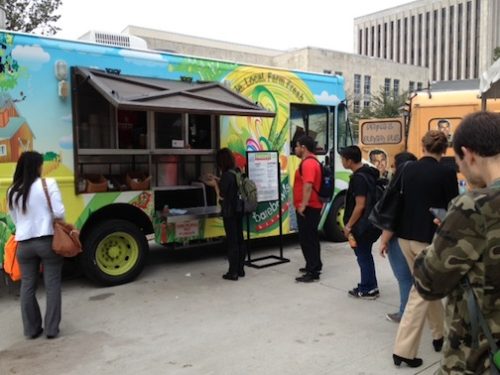 Phi Nguyen, a University of Houston alumni who had recently started his own food truck business, The Waffle Bus, after spending a year unemployed, found himself right back at his alma mater last spring when the school’s University Center was closed for reconstruction. Little did he know that he was about to become part of something truly special.

“I read an article in the Daily Cougar [UH’s student newspaper] that the UC was going to be renovated in the summer; we had only been open for a few weeks at the time. I e-mailed some of the representatives at U of H, so they came out to try our food while we were parked at the Museum of Fine Arts and they liked it,” he said with a faint grin.

At the time Phi was the first person to reach out to the University about filling the void left by the reconstruction of the University Center, a central hub of student interaction as well as food. Today the University of Houston serves as the proverbial land of milk and honey for food-truck entrepreneurs like Nguyen, who are unable to congregate elsewhere in the city due to a city ordinance preventing food trucks from operating within 60 feet of each other.

Which makes the food trucks stationed right next to each other at UH, providing students with an array of unique, creative food offerings to choose from, an anomaly. 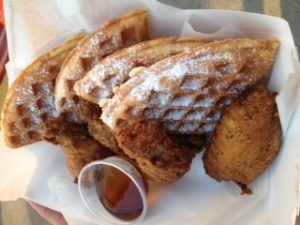 According to Nyguen, “The University is not technically part of the city; it’s actually owned by the state and therefore not subject to the same laws as the rest of the city.”

Not to mention that “there’s more foot traffic here than anywhere in the city, and the students love food trucks!”

The contracts between the food trucks and UH expire in December, the expected date for the completion of the UC reconstruction. After that, Food Truck Heaven will close, and students will be limited to the franchises in the UC such as Panda Express, Chick-fil-A and McDonald’s.

The trucks could potentially be subjected to exile in the purgatory that is Houston, and students would have to venture outside the city limits to find a place where food trucks thrive, side by side, and everyone can find something distinctive to pique their feeding fancy.

Which begs the questions, why the hell does Houston hate food trucks? and if they are able to stay at UH, will they be able to sustain business?

Umm, we couldn’t actually figure out the answers to either of those questions. However, not to worry, food truckers and students, you are in luck, because the University of Houston happens to be a place that encourages entrepreneurship and welcomes diversity.

Esmeralda Valdez, executive director of auxiliary services, tells Hair Balls, “The introduction of food trucks to our campus is part of the overall strategic food service program. Once the UC opens, the food trucks may move to more underserved areas of campus, but those details are still to be determined. At the end of the day, healthy competition and continued support of the city’s local entrepreneurs through the food truck program is very important and valuable to all of us.”

In spring 2014, the new UC will get a Cougar Xpress Mini Market on the first floor and a Starbucks on the underground level. However, for those who yearn to patronize one of the food trucks that include Phi’s Waffle Bus, Bernie’s Burger Bus, Bare Bowl’s Kitchen, Coreano’s, Kurbside Eatz, Stick It and The Rice Box, they will still be around.

When I walk down South Congress in Austin and see an entire street littered with entrepreneurs like Nguyen working hard, preparing an array of hand-cooked meals to satisfy a diverse set of taste buds, I feel like I’m in America. We have the unique privilege of being able to eat foods from all diverse sets of cultures while interacting directly with the individuals who make a living preparing those meals.

Why the City of Houston would want to stand in the way of that is beyond me, and therefore I have no choice but to conclude that Houston hates food trucks. Embrace the melting pot, embrace food trucks.