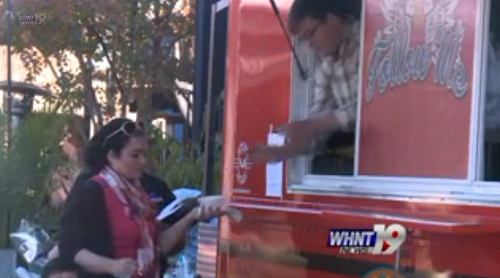 It was all in effort to help people like Sarah Hamilton and her twin babies, Tucker and Chloe.

“They were born at 30 weeks and 3 days at Huntsville Hospital Women and Children,” said Hamilton. She and her husband tried for ten years to have children, and once the twins came, they were in the neonatal intensive care unit (NICU) for more than a month.

She was one of many that attended the Food Fight event to support those who supported her, Footprints Ministries. With chapters all around the state, the organization assists families with babies in the NICU.

“We had the support of hundreds of people from the Footprints Ministry praying for them, and for us,” said Hamilton. “We couldn’t have made it through that tough time without their love and support.”

Event ticket holders got samples from the food trucks and voted for their top choice. Sugar Belle, Follow Me, The Little Red Lunch Box, and the Food Fighter Bustaurant parked in and around the Lumberyard and gave samples to guests.

“I just hope we raise enough money to really impact the lives of these families,” said Vicki Berry, owner of the Follow Me food truck.

More than 200 pre-sale tickets were sold for the event and proceeds will help further Footprints’ mission to comfort families while their babies are in the NICU.

“We pack 60 bags a month for all the families in the NICU,” said Katie Bowers, the coordinator for Footprints Ministries’ Huntsville chapter. The bags have receiving blankets, a Bible, and toiletries for the family and the baby.

“Charity and being able to do this kind of stuff is the main reason we got into this,” said Berry. She says she sympathizes with the families that benefit from Footprints after her own struggle to have children, and says being part of the event was a no-brainer.

“Footprints just means that we’ve been there and we know how to help, and we can walk with them if nothing else,” said Bowers.

Support from the food trucks and ticket holders gives them the chace to continue their mission.

“It’s all going back to support other families that are walking the same journey,” said Hamilton.

Follow Me food truck, owned and run by the same people who owned Victoria’s Cafe, won the competition. Vicki Berry received a plaque, but she says being part of the cause was the true reason she participated.