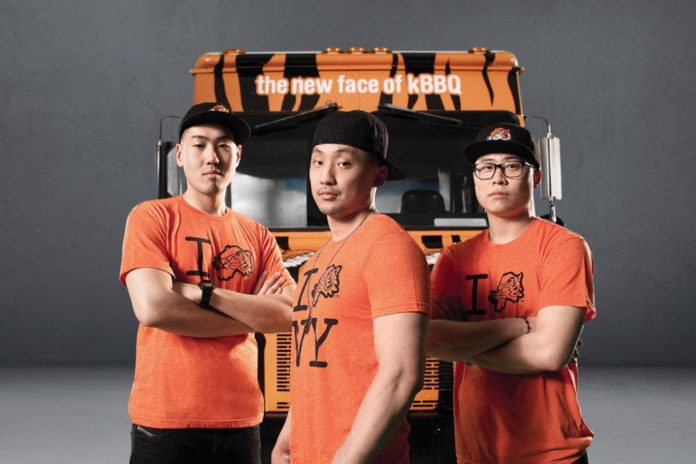 If you live in NYC, and you like Korean food, then you’ve probably heard of or seen at least one out of the three orange tiger-striped Korilla BBQ trucks roaming Manhattan, from Columbia University to the suit-lined streets of FiDi. Korilla’s next adventure is taking place on The Food Network’s The Great Food Truck Race, where eight food trucks are battling it out in a cross-country race to sell the most meals for a hefty $100,000 cash prize. Ed Song, the founder of Korilla BBQ, talked to us about getting ready for the big race.

You guys are contestants on The Great Food Truck Race – how exciting!! What sorts of things did you do to prepare for the race?

GFTR Season 2 was taped during the spring (April-June) of 2011 over 8 weeks. There was zero room to prepare – Food Network gave us only 3 days notice that they were flatbedding our truck. It was chaos as this coincided with our launch of 2 new trucks and we ended up taking our top dogs on the show.

They caught us at a pivotal time in our movement to bring Korean food to the forefront. We had to constantly work around the clock to manage Korilla let alone compete on GFTR.

How tough did you think it was going to be to successfully sell Korilla-style tacos to people who had never tasted Korean food before?

While we were traveling across the country, we would pray and hope we could get our hands on even gochujang! Aside from that, I am confident that everyone loves Korean food; they just haven’t tried it yet.

Were you nervous about preparing food and working as a team under pressure?

Early on, we realized that we had to prepare food on the actual truck. Though it was custom fabricated specifically for Korilla operations, it was a brand new truck. We never turned on the gas grill or electric generator! Another thing was that we had to prep all our food on the truck. Normally, we have a commissary kitchen that affords us the space and manpower to prep all our ingredients. The main reason we did not win first place in the first city of Las Vegas was because we had to figure out how our brand new truck worked and prep everything on the truck.

I am bringing along Steve Park and Paul Lee with me who I have known for over half my life. We’ve been in sticky situations before—this’ll just be another day.

Was it difficult to find ingredients while traveling cross-country? How good are your navigational skills?

Finding ingredients are key. I imagine one of the unapparent reasons why Korean food is not around everywhere Koreans are, is because of a lack of a supply distribution chain. Within a couple of hundred miles outside of cities like NYC or LA it’s not a problem, but once you reach the heart of America, you have to create your own supply chain.

Our navigational skills are pretty bad. We’re used to grid-like (New York) city planning where numbers go up as you go north and down as you go south. Thank God for iPhones.

The Food Network is basically mainstream television – what does this mean for Korilla after the show? Are there plans to set up shop anywhere?

The goal of Korilla is to create an accessible brand to introduce Korean cuisine to mainstream America. There are phenomenal Korean restos across America, but how many of them are packaged tight enough so that someone from Arkansas can understand and want to try Korean food? The recent popularity of Food Network, the rise of the Foodie Nation of America and innovative social marketing tools form the trifecta that can take Korilla and with it, Korean cuisine, all over America almost overnight. We will grow out of necessity (what else will 20-somethings do?) and the vision is to empower others to grow with us as we spread the good word about Korean cuisine and grow as second generation Korean Americans.

Watch Korilla BBQ compete in The Great Food Truck Race on The Food Network every Sunday at 9pm EST.